The Little Ladies, Too

Yesterday I bragged on my little gentleman. But, this morning I realized something about my girls.

They are turning into such diligent workers.

Don’t get me wrong - we do have issues. The bedrooms don’t get cleaned to satisfaction or the clothes don’t get put away or something gets forgotten. But, for the most part chores are not a major battle.

This morning I let the girls know I was headed to the shower. The response? “We’re headed to clean the kitchen!” I thanked 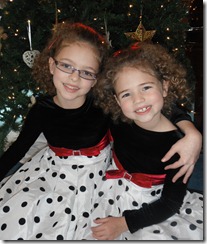 them profusely, and Olivia said, “Well, it’s on our chore list for today,” as if they really didn’t deserve thanks.

I love that about my girls. And I don’t want to take it for granted. I want them to know I appreciate it. I want them to know it’s part of what excites me about watching them grow older and more mature, knowing they are turning into godly women even in the mundane aspects of life. Yes, it’s a beautiful thing.