Steven is turning into such a little gentleman. Every ti 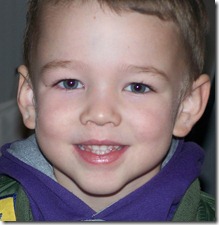 me I turn around, he’s wanting to make my life easier. If he knows I’m in the kitchen, he’s there in a heartbeat asking, “Is there anything I can do to help?” It’s not so much that he wants to do the work – he just really does want to be a helper! The other day I was folding clothes, and he came in to check on me several times to see if he needed to put aside his school work and help me out.

And then there’s nap and bedtime. He’s very much a ritual type of kid. A story. Songs. Snuggles. It used to be a pretty long and drawn out process. I started trying to wean him down, not so much because I didn’t want to do it, but more because life wouldn’t always allow me to go through the whole ritual, and I needed him to be okay without it.

Now we’re down to just a few things. At night he needs his music and nightlight on, a hug, a tucking, and his light turned off. Not much at all. Occasionally he’ll need a few extra snuggles, but typically he’s good to go if I do those few things. The problem is that his cd player is a little cantankerous and doesn’t always want to come on. So, it takes us a few minutes to trick it into playing. (We have a fun new one for him, but we’re trying to hold off until his birthday to give it to him!)

Lately he has decided that he wants to reduce my “work” as much as possible. So, he tries to get his nightlight on and his cd player fought with before I get in there to tuck him in! All to save Mommy work. I must admit – it’s a bit bittersweet.

But, my favorite thing is what I’m seeing in his heart. Steven has become the most thankful and repentant five-year-old I’ve ever seen. He never ceases to thank me for everything from smallest to greatest. And, it kills him to discover he has disobeyed or upset me. He’s the first to come and ask for forgiveness. The most precious thing about that is that I know such things can only come from God. And that means God is working on my sweet boy’s heart, bringing him to the point of salvation. I am convinced that is a mother’s greatest joy.