Skip to main content
Labels
Posted by The Hibbard Family May 29, 2012

In the great outdoors...clouds and heat. It was so much more humid this morning than it has been lately. I’m thankful for the dry air we’ve had up until now. Now I’m just praying that this humidity turns into tomorrow and Thursday’s forecasted rain coming on through. We’re DRY! (But, without the storminess would be great, Lord!)

A heart of thanksgiving...for flexible children; for all of the recent review items that have been exactly what we needed; for unexpected financial blessings; for the clutter around the house that reminds me we have more than enough; that this is the week we get to visit with the Choates!

A heart of prayer...for rain, for babies with cancer, for friends with decisions to make or lives in transition.

My diversions...should I really admit this? A few days ago the free app of the day from Amazon’s app store was a new logic puzzle. I’ve really tried to stay away from some of those game apps. I have a few that I enjoy now and then, but I’ve tried not to go crazy. But, this one was a cross between logic problems and Sudoku, both of which I love! So, I’m trying to be good and set myself limits so I don’t spend a crazy amount of time working these puzzles. But, they are very fun diversions!

Thoughts from the kitchen...or maybe I should say smells from the kitchen…Doug has brisket in the roaster slow-cooking today. Every time I go in to switch out a load of laundry, I get a good whiff. No wonder I want to eat everything in sight today! I can’t dig into the brisket yet!

On my bookshelf...The Truth About the Lordship of Christ by John MacArthur, and The Traveler’s Gift didn’t get read last week so it’s been bumped to this week. There are several others on my shelf, but they’re not due for a few more weeks.

Projects...after nearly two years of only using the dryer, I’m going back to hanging out laundry. Such excitement. (Can you sense the sarcasm?) But, I know it’s going to be helpful in so many ways, so that makes it worth it! So how exactly does this rate being labeled a project? Well, we’ll be hanging a retractable line in the garage. That way I can hang clothes out rain or shine, I don’t have to be out in the direct summer sun to hang them out, and I don’t have to worry about surprises being left on my clean laundry by the many, many birds in our yard! So, the hanging of the line is “the project.”

Sounds of the moment...ceiling fan, the dryer (no, I haven’t started “the project” yet), and distant music.

Last week we learned...that we really do need to take every seventh week off. My grand homeschooling plan is six weeks on, one week off. But, I always try to push it. At the end of six weeks, I don’t feel like we need a rest. So, we go into the seventh week. But, we always end up dragging that week. Then in the eighth week, something goes nutsy (often Mommy!), and we end up doing what we did last week and canceling school at the last minute. If I would just go ahead and stick to the plan instead of trying to push, push, push, we’d be so much better off! Lesson learned. I will be diligent to take that seventh week off.

A favorite thing from last week...watching my kids all get into organization mode. Makes me proud! Steven even organized the Wii stuff one afternoon. He was so proud when he came and told me what he’d done! Yep, they do get some things from their mommy.

The planner...school and housecleaning this week. Then on Friday night, OBU Night at the Travelers (Arkansas’ minor league team). The Choates will meet us there and then come spend the rest of the weekend with us. Yes, I’m excited! 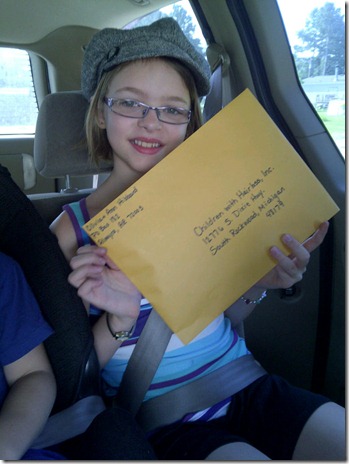