Skip to main content
Labels
Posted by The Hibbard Family May 22, 2012

I went to bed last night exhausted, but with much left undone. I woke up this morning still exhausted…and behind. I plunged into the day determined to get the school prep finally done in time to salvage the school day.

Then I gave up and canceled school…for the week! Yeah, probably a little extreme, but I feel so much better now!

So far the results have been fantastic! We walked over to the community center to vote, went from there to the post office, and then came back home to get a few things done. My success for the morning? The kitchen is actually clean. I don’t mean that I’ve just caught up on the dishes. I mean that the clutter that seems to multiply on the counters has found its true home. There are still dishes drip-drying (I hate to dry dishes) on the counter, but the clutter is gone! Now all I need to do is wash refrigerator shelves.

Meanwhile, Steven spent much of his morning right here… 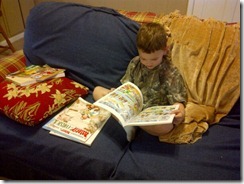 Those are comic books, by the way. Baby Blues and Asterix. I love to hear his chuckles, interspersed with occasional bursts of laughter. He has since moved on to join his sisters in their activities.

The girls proved this morning that they are, in fact, their mother’s daughters. Their morning chore was cleaning the bathrooms. But they didn’t just clean. They decided to clean out the cabinets and drawers. Organize. YES!!!

I asked them if they had anything else they wanted to organize.

They asked me if they could do the toy closet!!! 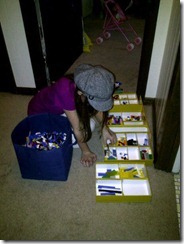 Seriously? You had to ask? Yes, you have my permission to organize the toy closet. 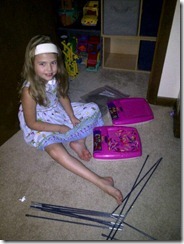 The funniest thing happened around 10:45, though. I didn’t come out and tell them we were dismissing school for the day, much less for the week. Angela came in and said, “Mommy, since we’re doing all of this organizing, I’m not sure we’ll be finished in time to do school. Can we have the day off?”

“No, you my not have the day off.” It took them a little while to catch my meaning. Needless to say, they were delighted to replace “day” with “week!” I actually hoped we would make it until Olivia’s sewing camp in June before we took a break, but sanity required otherwise. And it’s okay. Just part of the delights of homeschooling!

Herding Grasshoppers said…
Amen, my friend AMEN! So glad we have the flexibility to do what we decide is best for our families!

And I LOVE that the girls are organizing!!!

Enjoy your week off,

Choate Family said…
Yay for homeschooling flexibility! We might need to borrow your organizational team.