In the great outdoors...we were rejoicing this morning because there were clouds and they looked like they were building! But, alas, they have mostly burned off with the rising sun. Although there are still some stubbornly persisting. And we still do have a 30% chance of rain this morning. And the high is only supposed to be 95! YAY!

A heart of thanksgiving...for the freedom to gather as believers yesterday.

My diversions...right now seem to coincide with what’s on my bookshelf and in my project list.

Thoughts from the kitchen...the grill. Yes, it’s that simple. Doug got an unexpected gift of money on Father’s Day, and he used it to buy a portable propane grill. We have a charcoal grill that we enjoy when we actually plan for it, but this new little propane grill has made life so easy! It was especially handy Friday when the power went out just as lunch was heating on the stove. Doug popped the burner attachment onto the grill, moved the skillet outside, and lunch went on as planned. Perfect.

On my bookshelf...lots of fiction on the docket for the next couple of months, which makes me smile. A growing list of a wide variety of books to review for HEF’s review site. And this week’s review book, which I am really enjoying. It’s a fantasy novel, which isn’t a “natural” genre for me – my brain has to work a little harder to process written fantasy. It’s much easier for me to watch it in movie form. My biggest problem with this book is that I let myself request a “book two in the series” book again, so there is obviously information I’m lacking. That, naturally, adds to my processing slowness. But, I still like the book a lot and hope to get to read book one at some point.

Projects...still working on the napkin project, not because it’s hard or overwhelming, but just because I only have small segments of time to devote to it. But, each child has four napkins so far, and there are several more ready to hem. The kids decided to pick one out at breakfast and then use it at every meal that day unless it became super-soiled at one meal. Thanks, kids!!

In other project news, I’m starting to think about Christmas. Doug’s in the process of writing his new advent devotional book for this year, so if he can think about Christmas in July, I guess I can too! Maybe this year I’ll actually get started on my projects in the next month or so instead of just thinking about them! I’m thinking, though, that we need to pick a Christmas album to listen to while we work…you know, just to get us in the mood!

Sounds of the moment...kids playing for a few minutes before school starts.

Last week we learned...about kite fighting. Something I never knew about! Olivia is supposed to finish the book this week, reading the chapters that discuss the actual fight. But, I finished it on Saturday (because I do try to stay ahead of her!). Fascinating stuff.

A favorite thing from last week...laughing until I cried at the Tim Hawkins/John Branyan concert. It was a great date night with my beloved. We’re still laughing over some of the jokes.

The planner...school, the Browning side of the family coming here Wednesday to celebrate Independence Day with us, hopefully swimming with some friends we haven’t seen in a while, more school, then to North Little Rock Friday for errands and the last summer NLR Community Band concert. We’re praying for cooler weather that night!

Because visuals are fun...this is what the window beside our front door normally looks like. Those black dots are mosquitoes, and that is only the top portion of the window – it extends the full height of the door. This was taken the day of our last rain, four weeks ago. One advantage of the dryness is that the mosquitoes have diminished greatly. I only counted a dozen across the entire window this morning. 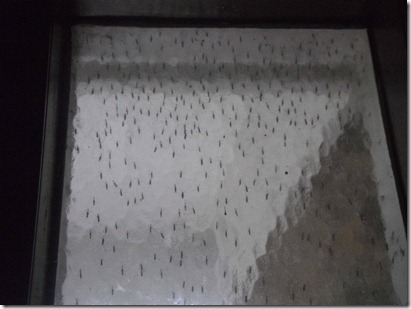 Teish said…
We got a great deal on a camp stove a few years back. It's nice to have something to cook with when the power goes out isn't it? :-) (Though I usually have something in the OVEN when we lose power, LOL!)
July 2, 2012 at 9:35 AM

Herding Grasshoppers said…
Yikes - those mosquitoes give me the shivers!

Sounds like you're going to have a fun fourth of July - enjoy!