I’m a bit confused. I really thought I saved a lot more pictures than this to include in this post. But, I also did discard a good number because our phone cameras just could not capture the distant motion. So, anyway, here’s what we have!

We found a nice spot to just unload and camp out for the day. We were in the shade of a C-130. See Steven all huddled up? Yep, we were chilly! The kids would slip out into the sun for a minute to warm up and then duck back into the shade. It was so nice to be chilly! 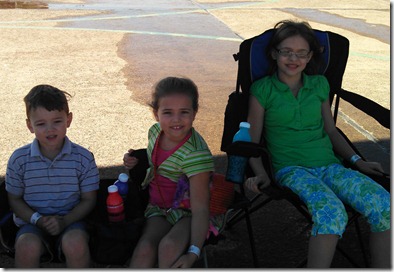 We started with the Canadian SkyHawks! I love that their parachutes are the Canadian flag. I always snapped too late to get pictures of them connected. Those stunts were amazing! 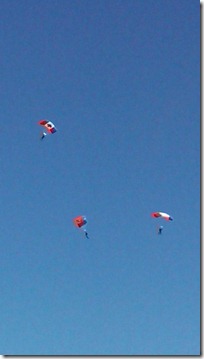 This one descended with our flag waving beneath him as the Star Spangled Banner was sung. That was pretty awesome! Doug had some great video of it, but it’s sideways and I can’t get it to turn upright, so I’m going to leave it out. Here’s a picture, though. 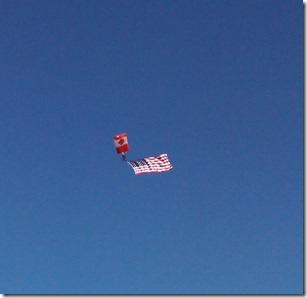 Then the planes began to fly. We saw an F-18 Super Hornet flying upside down (among other things!) 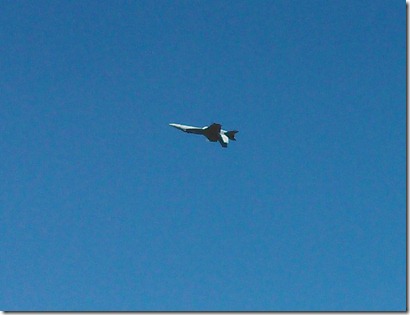 Otto, a fun helicopter with personality (there is a face painted on the front of the helicopter, though it’s hard to see here). In this picture, he was playing with a giant yo-yo! 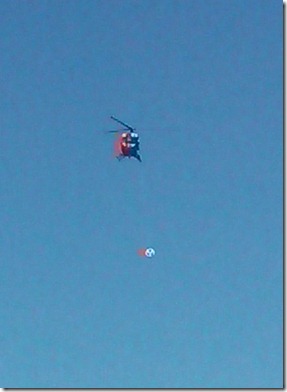 The Heritage Flight is one of my favorites. The Heritage Flights began in 1997 on the 50th Anniversary of the United States Air Force. The idea was to feature an aircraft from the early days of the Air Force (or even the Army Air Corps) flying side-by-side with a more modern aircraft. 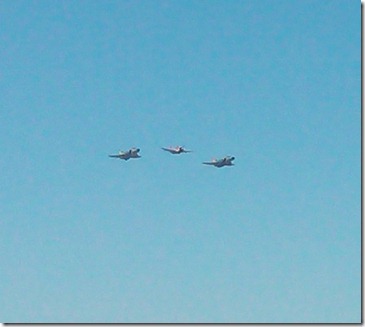 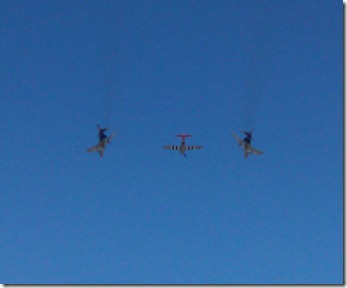 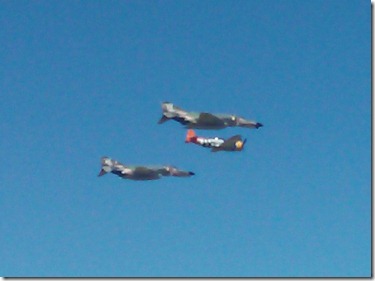 I love this shot from under the wing of our “Sunshade C-130.” 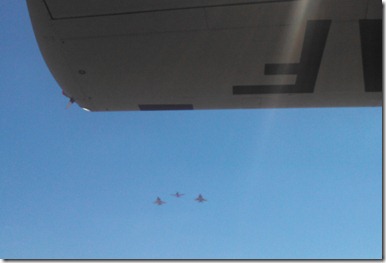 A couple of times, we had neat views of planes flying over the static displays, like this B-24 Liberator from World War II flying over a B-52. This B-52 is from Barksdale Air Force Base in Shreveport, which is near where Doug’s parents live.

Then there was this shot – a C-130 on the ground, and I really think that little dark speck on the right above the wing is Fat Albert, the C-130 that flies with the Blue Angels.

One of the most exciting parts of the show was the demonstration of taking an air strip. First came the helicopters which dropped supplies and even a hummer! 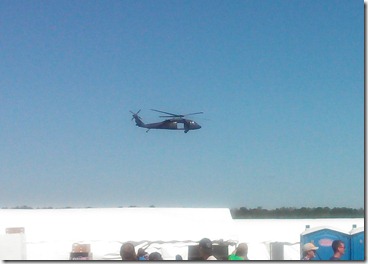 Then came the C-130s to drop the personnel and more supplies. Doug and the kids moved into a better position to try to catch a first glimpse of the planes. 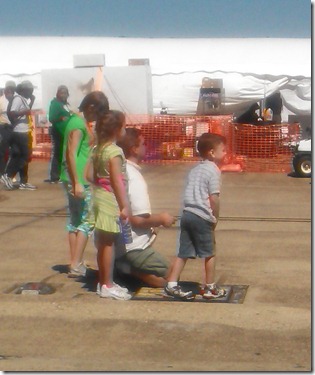 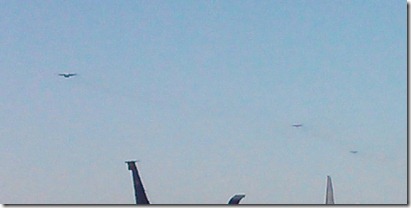 Doug got some great video of the drop. 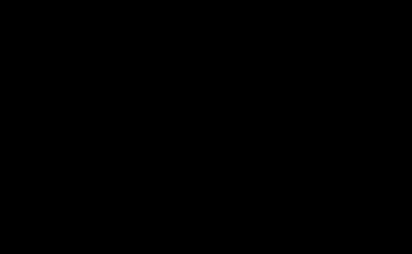 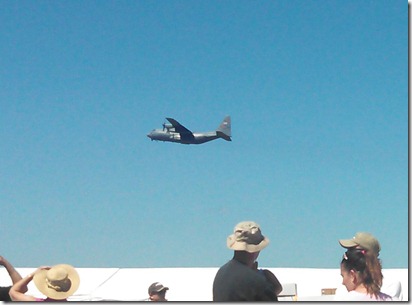 We were all pretty tired before it was time for the Blue Angels to close out the show. We stayed long enough to get a close-up view of Fat Albert. He’s not as exciting as he used to be. He used to be modified with extra jet assistance for quick take-off, so it added a bit to the drama. Now that he’s upgraded to the J model, that is built in and take offs are the same as with any other C-130J. But, it was still awesome to see this beautiful plane painted with the Blue Angels color scheme. So, we stuck around to watch him take off… 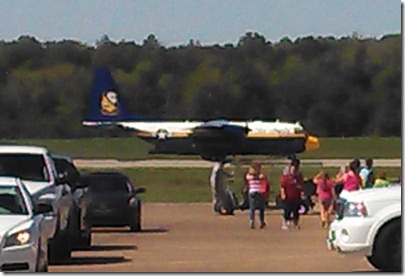 show off in the air… 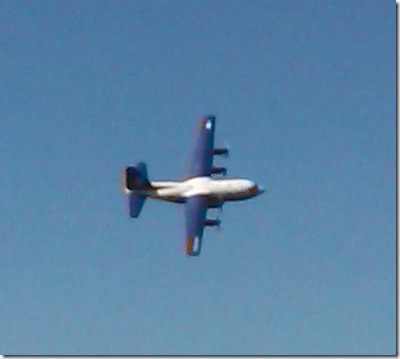 and coming in for a landing. 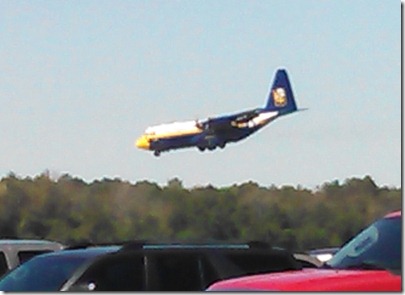 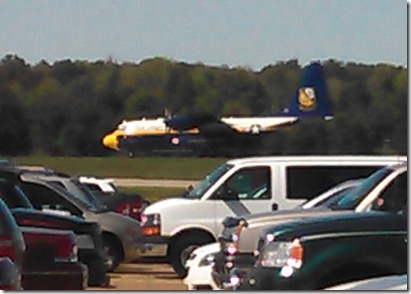 As we headed into Jacksonville for a quick snack before making our way home, we did get to watch a bit of the Blue Angels as they made their rounds and gathered into formation to fly back around in front of their audience. 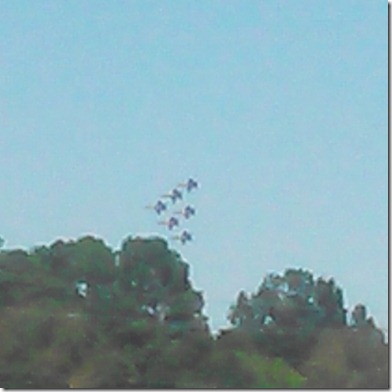 All in all, a fun day once again. Oh, and that picture I couldn’t fine of the kids in the nav’s seat? Here it is!! 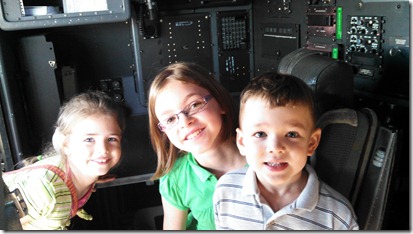