In the great outdoors...hot, hot, hot. Isaac left a new heat wave in his wake. On the positive side, we were a bit afraid we wouldn’t have many more pool chances this summer. Thanks to our busy schedule, colds, and the cooler weather, we only swam once or twice the entire month of August! But, it looks like this week will be a great pool week!

A heart of thanksgiving...for almost nine years of Angela. Hard to believe.

A heart of prayer...for the farmers whose work was more than doubled by Isaac. Most of the rice that wasn’t cut is down, as much from the thunderstorms on the tail end of Isaac as from the hurricane itself. We’re praying now for equipment to keep working well. Downed rice is exceedingly tough on combines.

Random observations...it’s football season! We enjoy keeping up with sports in general, but football is the only sport that is a family affair for us. And just as a neat little factoid, our alma mater Ouachita Baptist University has the distinction of playing the first NCAA football game and scoring the first touchdown of the season. Go Tigers! (And yes, they won the game.)

Thoughts from the kitchen...all belong to Angie. She is splitting her birthday celebration between today and tomorrow, so she gets two of her birthday meals today and one on her actual birthday tomorrow. But, more on that tomorrow…

On my bookshelf...a whole lot of fiction that I have to read for review! That makes me smile.

Projects...I did manage to get Angie’s birthday present made! Now I still need to make those organizers. Soon. Definitely soon.

Sounds of the moment...a shower running; the lawn mower as Doug tries to stay ahead of the grass growth after plentiful rain and sunshine; Steven batting around one of the balloons from Angie’s party.

A favorite thing from last week...the start of Razorback football!

The planner...Angie’s actual birthday is tomorrow, then we have two days to cram in the real work for this week before we leave Friday after lunch to head to Little Rock. Errands Friday afternoon (primarily Angie & Steven spending birthday money) and then the Air Show at the Little Rock Air Force Base on Saturday!!! YAY!

Because visuals are fun...Steven was so excited about getting ready for the game that the helmet didn’t even come off when he was brushing his teeth! His PopPop threatened to get him an LSU helmet. He said the only purple and gold Tiger helmet he’ll wear is a Ouachita helmet! That’s my boy. 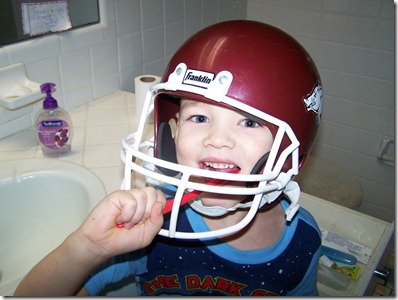 Herding Grasshoppers said…
I've been thinking about you all, relative to Isaac. Sorry about the heat wave! But an airshow on Friday... FUN!!! Hope you'll post some photos :D