Angie has hit the in-between stage of sewing. She is much more independent than last year, but still needs a great deal of help. This summer she’ll be old enough for sewing camp, and I think she will advance tremendously after being taught those basics by the pros! In the meantime, she is honing other skills. She learned the concept of weaving in art class last session, and has been making her own cardboard looms to weave on. I have a beautiful variegated mug rug sitting on my desk right now! She also has worked hard to learn how to crochet. She recently mastered the double or box stitch, so next week I will teach her the triple stitch.

Angela picked some fantastic Christmas gifts to make this year. They were simple from a sewing perspective, allowing her to do much of the work. But, they were not gifts that ended up with a simple look. Perfect for a beginning seamstress!

We started and ended with Olivia’s. First we made a scarf. I love these scarves because they are so easy and so very warm! Depending on the fabric, they can either look fun and casual or very elegant. I have a gray one that works beautifully with my dressy wool coat, yet pulling out some camo material created the perfect everyday scarf for Olivia. I showed Angie how to cut straight strips of fleece, stack them on top of one another, and sew a seam lengthwise down the middle. Then she took scissors and fringed the scarf down both sides of the seam. I missed getting a picture of the end result, but here she is fringing. 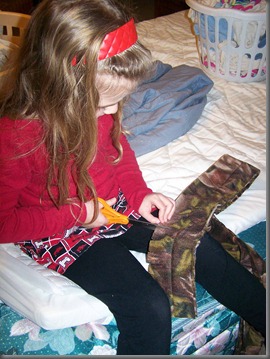 After all the other gifts were done, we decided to make a last-minute addition. We thought Olivia might enjoy a fun fringed hat – and we were right! For the first week after Christmas she hardly took it off! 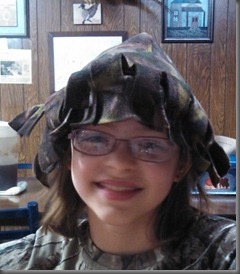 Meanwhile, Angie wanted to make something matching for Doug and Steven. Steven loves to help Daddy cook, especially on the grill. Angie found cute “King of the Grill” patches, so we made aprons, trimmed them with red decorative stitches (resembling deer antlers!), and ironed on the patches.

Through the process, she got to be the first to make use of our handy-dandy little bias tape makers and she learned how to use the hemmer foot on the sewing machine. 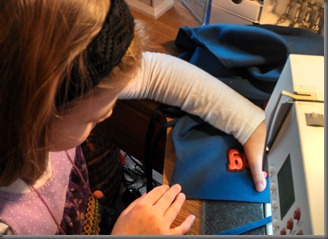 She was very pleased with the end result. 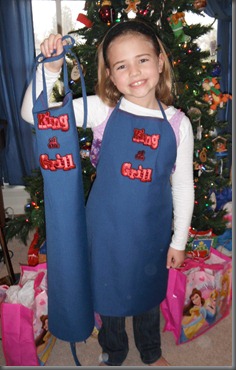 I think the fellas were too! And now you know why Han has a blue apron with “King of the Grill” stitched on the front! At this point, we just need to make Steven a chef’s hat (Doug has one), and they will all three be good to go! 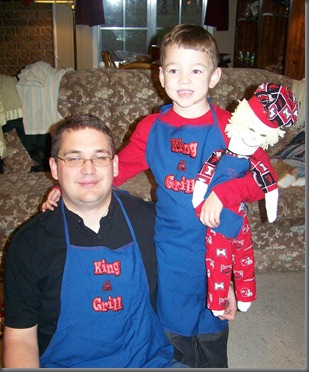