Skip to main content
Labels
Posted by The Hibbard Family May 27, 2013

In the great outdoors...it’s dark. I’m writing this much later than usual. We were hoping to see the planets (Mercury, Venus, and Jupiter close together) tonight, but there was just enough cloud cover on the horizon to keep us from seeing them. Still, I can’t get over just how much we can typically see in the night sky without the interference of city lights. It’s breathtaking even when it isn’t something “special.”

Within our four walls...quiet. The kids are in bed.

A heart of thanksgiving...it can never be said enough – I am thankful for the sacrifice of those who have given their lives defending our nation and our freedom. But, I also can’t help but remember those who died that I might hold an English translation of the Bible in my hands and read it freely.

A heart of prayer...for wisdom and mental clarity as we dive into the full summer ahead of us.

Random observations...I hate fondant. I thought I’d try it for Olivia’s birthday cake. Of course, I’ve never actually worked with fondant before, so I don’t even know if my homemade stuff was the right texture! The humidity might have make it too wet, I don’t know. All I know is that it was a mess. At least it tasted all right, and Olivia was happy with her cake! That’s all that matters!

My silly children...were just goofy today. Downright goofy. Their mother wasn’t a part of that at all, though. Nope. Not one bit. Nor was their father. Okay, so maybe he was a little bit, but not me.

Thoughts from the kitchen...we have a menu plan!! In fact, it’s enough of a menu plan to last us almost a month! Ah…how good that feels. It still needs to be organized, taken from a list of recipes to an organized day-by-day plan, but that’s the easy part.

On my bookshelf...finishing Gospel Centered Woman this week (unless it takes a wacky turn, I highly recommend it!). Working through our summer readers: Finding God in the Hobbit with the girls and a biography of CS Lewis with Steven. We’ll also be starting The Lion, the Witch, and the Wardrobe this week as a family read-aloud. It’s time for Steven to be officially introduced to Narnia!

Projects...Well, I got Olivia’s nightgown done with a couple of days to spare, and I got the sock doll from Steven done at the last minute. I just realized I haven’t heard her name yet. Anyway, here they are. 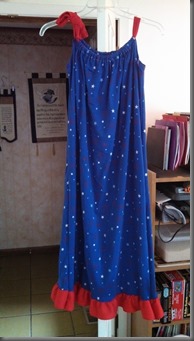 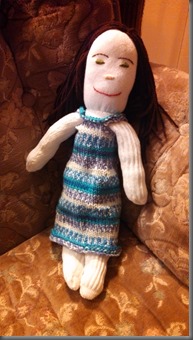 The gown is so long and full that Olivia will never outgrow it. She’ll either wear it out or decide she doesn’t want it anymore. She can also keep it out in the winter by simply putting a long-sleeve pj top underneath it. I think this just might be the ultimate gown pattern! Angela has already clearly indicated she loves it and wants one too (no surprise there!). I might even have to try one out myself!

Meanwhile, I told Steven I’d get his pj shorts done this week, so I guess that’s the next project! To bad I can’t find a pattern he won’t outgrow!

A favorite thing from last week...I got to try out some more sewing machine accessories that have been just sitting there waiting for me for months. My double needle and gathering foot were wonderful for making Olivia’s gown!

The planner...well, the Gleaner’s lunch was cancelled last week due to weather, which was fine by me since I had a sick little boy and wouldn’t have been able to go anyway. It’s been rescheduled for tomorrow, though. Looking forward to it! Praying a couple of our sick ladies will be healthy by tomorrow.

The rest of the week will be light school, editing, trips to the pool, and then a quick trip to Judsonia. Mom’s planning a mansaf, which is nice since several friends have been posting on Facebook about the Jordanian meals they’ve been enjoying lately. Dare I hope for leftovers? My sister Alli will be there, and we even get to love on my nieces (oh, and their parents too – love ya, Ben & Ashley, even though you do play second fiddle now!). I can only imagine how much little Nora has changed since we last got to see her!

Because visuals are fun...I love how they love each other! 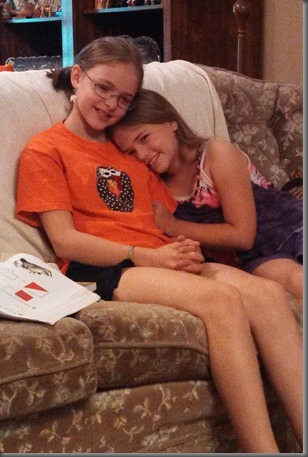 The Hibbard Family said…
I'm thinking your girls might need a lightweight cotton instead of knit for the SI humidity!
May 29, 2013 at 4:17 PM