Skip to main content
Labels
Posted by The Hibbard Family May 04, 2013

Remember those summer North Little Rock Community band concerts we have enjoyed attending over the past few years?

Or this one in 2011 when Mom was home for a little while and thinking about joining the band when she returned permanently, and we got to enjoy the concert with her and my brother Tim: Catching Up

Then there was last year, when we actually got to see Mom play: Concert & Visiting

Do you notice the clothing we’re wearing in all of those? After all, the outdoor concerts are called the “Summer Concert Series.” They start in May so that hopefully at least two concerts can be enjoyed in early May and June while the outdoor temps are still bearable. The third concert in early July is always expected to be pretty hot.

But, never do we expect this: 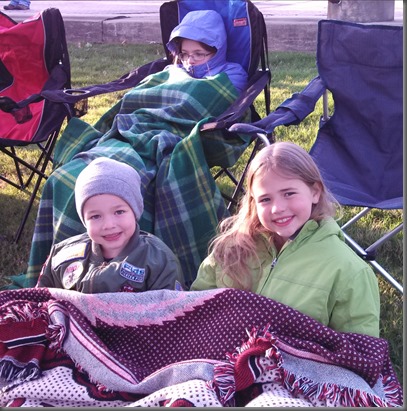 Yes, that was my children yesterday! In Arkansas! And they were not being wimpy! The temps hovered around 43-44 degrees, which wasn’t so bad on its own. The problem was the stout breeze and the wind chill which rested somewhere in the upper thirties.

Yesterday Arkansas experienced something that has never been experienced since weather records have been kept. Northwest Arkansans woke up to snow in May!!! One person measured 3 1/2 inches in her yard! A gorgeous picture of snow-covered Razorback stadium floated around Facebook yesterday. In May!!! Some of you might be used to May being chilly, but for us a chilly May means we might have to wear light jackets, especially in the morning and evening. Still being cold even while bundled up in our warmest coats and covered in wool blankets is not exactly our idea of chilly!

I have to let you know, though, that, while we are astounded, we’re not complaining! Well, okay, so the farmers are pretty concerned, especially since we did have frost last night (we’re praying that it was a light, late frost that did not damage to the young crops). But, I’ll take any delay to the humid summer I can get, while still praying  for crop protection.

Meanwhile, we enjoyed the concert. The band did a great job, even with cold instruments! The Pine Bluff band joined the North Little Rock band, so there was a bit of variety. Each band played a few pieces independently, and then the two bands played several things together. Much fun, for sure! 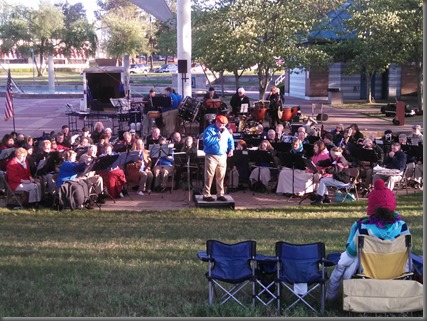 We finished the evening huddled around tables at Chick-fil-A for a snack and a little more visit time with Mom, Dad, and a friend who came along with them. It made for a late night, but a fun one!

Herding Grasshoppers said…
Snow in May! That would be pretty unusual up here in the north! No wonder your kiddos were bundled up :D Still looks like fun, though,