Skip to main content
Posted by The Hibbard Family June 07, 2008 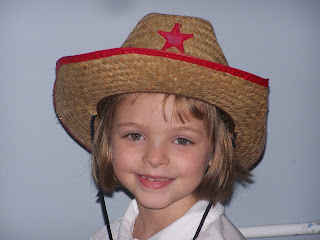 Olivia has learned a new skill - playing Spades! She comes by it honestly - Doug and I were a formidable Spades team before we were a couple (yet another sign that we were meant to be!). She saw Doug playing a game on the computer this morning. He got up, and she sat down to finish his game. Doug and I were giving her tips and pointers, and she played two games with our help. We set up a shorter version of the game for her (to 250 points), and after playing another game this morning and a couple this afternoon, she'd mastered going nil - something she seems to love - and had played and won two games on her own. (Don't worry - computer limits are effective immediately!) Very soon I'll be getting out the deck of cards to work on nerts, solitaire, and Spades with real people.
Email Post

Choate Family said…
We've been working on spades with our crew, too! Bidding is still a little tricky. I see a mean spades tournament in our future!
June 7, 2008 at 10:35 PM