Skip to main content
Labels
Posted by The Hibbard Family May 21, 2009

For the past several months the children's choir has been working very hard preparing a program for presentation. The older kids prepared a couple of songs that they sang and learned two skits. Everyone learned a couple of fun songs to go along with the skits. As with any children's program, there are always a few nerves, wondering what in the world is going to happen. But, they were fantastic! The only hitch was Steven deciding he had to have his parrot hat for the first song and wanting to sing the first song a second time! Doug managed to convince him to sing the second song wearing his parrot hat and all was well!

I got the easy part of leading in all of the songs and being available for the skits. Tina Bailey, the wonderful head lady of the children's choir did all the real work, planning the program, brainstorming the animal costumes for the Noah's Ark skit and song, and then corralling the younger kids while the older kids were doing their things. I have to say I'm glad we're done, but it was definitely exciting to see it all come together after putting the work into it. And the kids did incredibly well!

Here are the pictures...
The older kids singing one of their songs. 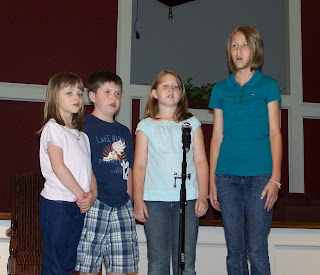 Unruly animals refusing to quiet down and line up for "Noah's sons." As soon as "Noah" came out and yelled, "Quiet!" every one of them sat in orderly fashion against the choir partition! Two to five year olds included! Now THAT was a miracle! 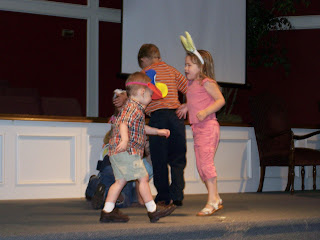 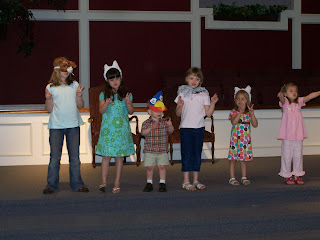 Olivia memorized all her lines for her skit, pretty much without any coaxing from me. She needed help learning one line that was more of a paragraph, but once I gave her a few tricks, she had it down in minutes. I was very proud of her for making memorization her own goal! Here she is in part of the skit she did with friends Nicole and Zach.

The song after the second skit...Steven in his parrot hat. 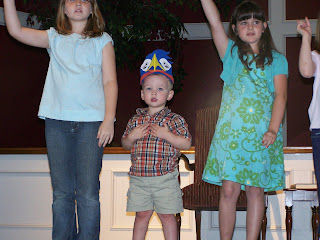 Angie singing with the group. 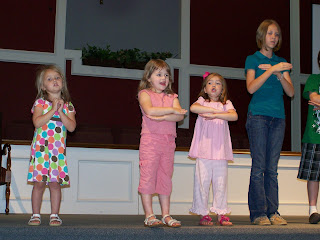 Okay, I said I would comment more on my social butterfly breaking out of his cocoon. Those of you who knew him before we moved wouldn't recognize him now! (Monticello folks, just go chat with a few of our friends in Joiner, Southaven, and Memphis - they'll tell you I'm not lying!) Steven has become incredibly and exceedingly comfortable with people at church. While I was leading the kids through the last practice before our program, Steven ran and joined Mark and Meranda, two favorite people from his growing list of favorite people . They let him play with their camera, snapping pictures to his heart's content. When he wasn't on stage singing or running around like a wild animal (only when he was supposed to - yes, even he sat perfectly during the Noah skit!), he didn't come sit with me or with Doug - he went right back to the Caters. Yes, this is the same child who would burst into tears if anyone outside of our family even spoke to him. I love it! 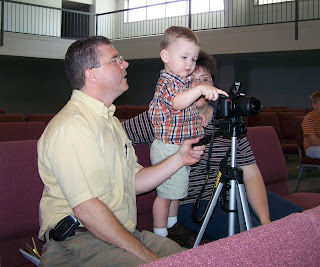 So, that was our program. Now it's time for at least a short break before we decide what to do next. Thanks to the little kids for cooperating so well and to the pre-teens who jumped right in and enjoyed the kids' songs while adding the fullness of the skits. It was fun!
Email Post
Labels: Daily Life

Choate Family said…
Our children's choir program in Dallas was Wednesday night, too, so we are living vicariously through you guys!
May 21, 2009 at 10:46 PM