Skip to main content
Labels
Posted by The Hibbard Family May 09, 2009

A Look at the Week

On Tuesday I had one of those "conquer the chaos" days. Those days are dangerous because I don't really want to do normal things - I was to totally reorganize! The intense feeling arises in me and I just can't help it! I have to dig in!

Of course, I now I have a list of projects to work on - the school room, the sewing area, the living room bookshelves, the this, the that...that's going to take a while! 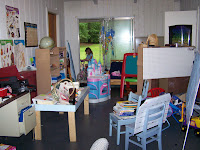 The most urgent thing for now is the school room. Why? Well, first of all, I'd just been thinking that it would be wonderful to have a desk of my own so I wouldn't have to hunch over the small table. Little did I know that God had provided before I ever thought of the need! I love that! Several weeks ago, Doug had gone to pick up some furniture that was being donated to our new Crisis Pregnancy Center here in town. When he went, there were several other things that the new center didn't necessarily need, and one of them was a small desk. It was perfect for me, but it didn't quite fit in our current setup. So, the reorganization began! We've still managed to mostly keep up with school this week, amazingly enough, but trying to tame that chaos and rethink our organization has taken up much of my free time this week. It's looking so much better, though! I'll get after pictures when it's finally done.

As for the kids, they've just been cute this week. Yesterday Steven decided he was LuLu's boy, so she got him ready for naptime. It was really cute! She took him to potty, then took him to his room. They sat in the rocker together and Olivia joined them for singing time. Then Angie crawled up in bed with him and read him a story. Later she noticed he was playing in his bed, so she went in to remind him to go to sleep. Then I noticed he was still playing pretty loudly, so I went in there. He saw me and said, "I want LuLu!" I told him to go to sleep! He wasn't too happy with me, but he went to sleep. By the time he got up, he was Mommy's boy again! :-) I never have to worry about him staying someone else's boy for very long! 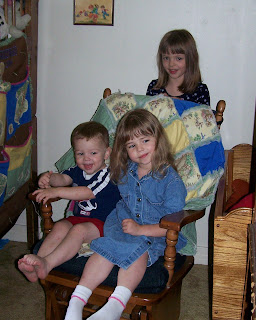 The girls came up with new hairdo's yesterday. Here's Olivia's flower in her hair. Her hair wouldn't quite do what Angie's did because it's too fine, but I thought the flower was really cute! 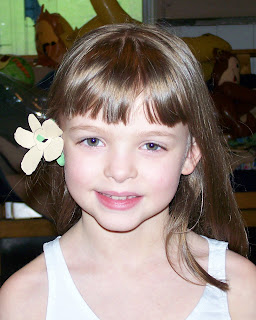 Angie went for the Princess Leia look! :-) She managed to twist pencils in her hair just right. She's been wearing it like this for two days! 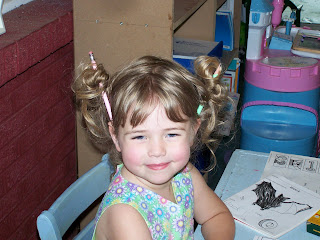 Oh, and Steven wanted to have date night last night. Doug told him he needed a wife, so Steven asked Doug to find him one! Later Steven came in and said, "Daddy, where's my wife?" Um, it's going to take a few years, son, but we'll keep working on that one. We have a few little girls in mind, but their parents might not be quite ready to let go of them...
Email Post
Labels: Daily Life

Mandy said…
That picture of Angie is gorgeous!! Maybe I should try twisting some pencils into my hair? lol

I can't wait to see the classroom all reorganized! I love doing projects like that. When I do them, though, the REST of my house turns into a nightmare b/c it's so neglected. :o
May 13, 2009 at 1:40 PM