I just realized something - I haven't posted Angela's most recent news!

Angie has been wiggling on a couple of teeth for quite some time now.  One of them - her first loose tooth, by the way - was so loose it was practically hanging, but she wouldn't let us just tug it out.  Finally after lunch on Saturday, Doug decided it was time.  And sure enough, out it came!  She was ecstatic! 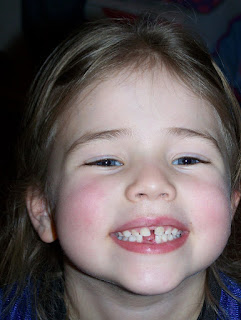 We quickly discovered that the new tooth was already coming in behind the old one!  We won't let its neighbor go that long - it should be coming out in the next week or so.
Email Post
Labels: Growning and Learning