I think I've confessed before that preschool has not been easy for me.  I am discovering more and more as each year passes just how spoiled I was by our time at MDO.  The girls were taught so very much every Monday and Thursday, and it really satisfied their hunger for learning.  Without MDO, it's a little more challenging to satisfy Steven's desire to learn.  Teaching a preschooler is time-consuming, and it's hard to carve out enough time to satisfy him while still successfully teaching the girls.  I run across so many homeschooling parents who have the exact same struggle, so it is definitely helpful to know I'm not alone!

Over the past few months, Steven has wanted one thing - to have "independent work" like his big sisters, namely math and writing.  A couple of weeks ago I started handing him coloring sheets.  He has always bucked against coloring objects.  He has just wanted to draw freely.  But, I coaxed him into working on these letter pages.  I was exceedingly proud of his first conscious attempts to stay inside the lines! (And no, there was no help from Mommy.) 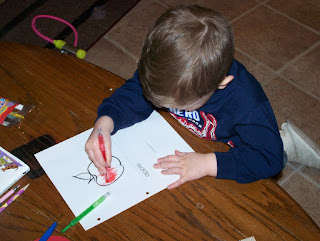 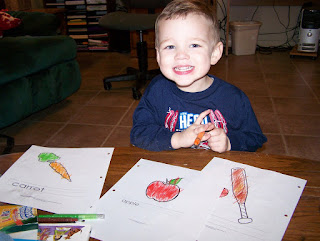 Then, our books began arriving, including two brand new books for Steven.  Oh, was he ever excited!  I did a great deal of research and had decided to go with the preschool books in the Explode the Code and Wordly Wise series - and then I made a sudden switch.

First, I found a Brain Quest workbook for preschoolers.  It was labeled for 4-5 year olds, but several of the reviews said there were activities that could be begun with 3 year olds.  It looked so good, and it was inexpensive, so I ordered it.

Steven and I sat on the couch the day it arrived and thumbed through it, page by page.  He was thrilled, and so was I!  It is perfect, and has activities he can do now, but also activities that will keep him challenged until we start KG, a year and a half from now.  It covers phonics, a variety of math concepts, some science, and some general life information.  Some of the activities are independent, and some will require help.  He is so proud of his big workbook! 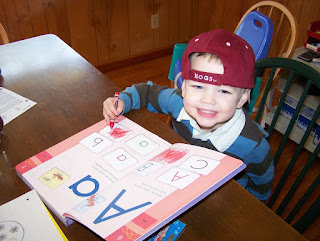 The other book I ended up with was the Handwriting Without Tears preschool book.  We use HWT for the older girls, having gotten started with it because of the rave reviews over the ease of teaching left-handed students to write well.  I had initially thought there was no real reason to start so early on HWT with Steven, but then I had a chance to flip through the workbook at Mardel one day.  I was sold!

He loves it already, and not just for writing and coloring.  He also uses it as a guide for his current favorite puzzle - an alphabet train puzzle.  He looks at the alphabet chart in the front of his book to know what letter to search for next in his puzzle. 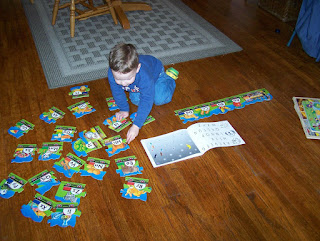 Of course, we haven't completely sold out to worksheets and independent work.  We're still enjoying games, flashcards, and manipulatives as well.  I confess that I still greatly look forward to the day when Steven and I begin his KG work (even though I'm not ready for my baby to be that big!).  But, it is fun to finally be excited about the challenge of teaching my preschooler!
Email Post
Labels: Hibbard Elementary

The Hibbard Family said…
Teaching Olivia has definitely been easy, and I was worried about it! As long as you don't mind vertical cursive instead of slanted, it really is a great program. I haven't bought a lot of their accessories - I've mainly made my own. But, I definitely recommend the program for leftys.
March 1, 2010 at 11:34 AM