There's not much news of late, which is not a bad thing at all!  It's nice to have a dull day or two now and then!

On Saturday we went to Monroe to do some Sam's shopping and wish Doug's mom a happy birthday.  I forgot the camera, so I have no pictures, but we had a great visit.  We enjoyed lunch and then did a bit more shopping with Doug's mom before heading home.  The girls wore Grandma's Red Hat hats around all day and loved it!  They were so cute - yep, I regretted the absence of the camera.

So, since I don't have pictures of our sillies in Grandma's hats, instead I'll share a few random pictures. 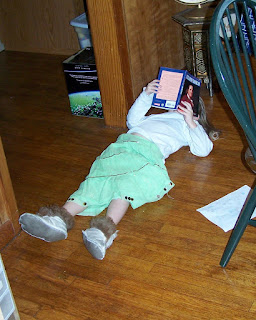 This was taken after we got home from being gone for several days.  Mina missed Livie so much - she plopped down in Livie's lap and didn't let her up for quite some time! 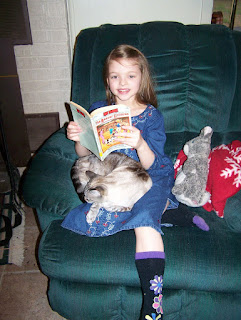 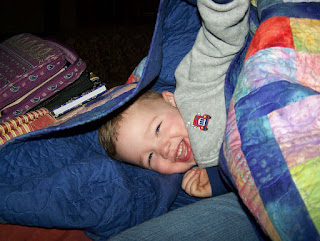 And this is from today.  We've never actually seen a spider's egg.  I've seen egg sacs before, but in each of the ones I've opened (out of curiosity), the little spiders have already been well-formed.  Well, today we found a dying spider on the underside of the seat of Steven's three-wheeler.  She had apparently recently finished her egg sac and had very little energy left.  Not wanting a whole bunch of little spiders running around, I reached in with a stick to go ahead and kill her and then intended to burn the egg sac.  As I reached in, the egg sac burst open exposing a bunch of little translucent balls. 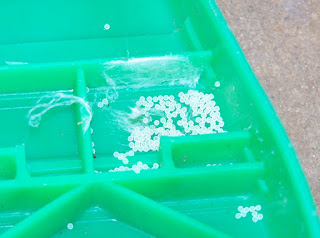 Typically I burn egg sacs, just to be sure no baby spiders survive (no, I don't like spiders).  Out of curiosity, I held the lighter to the little eggs to see what would happen if I tried to burn them.  They exploded!  We all gathered round as I put the flame to the little eggs.  It sounded like miniature popcorn popping!

Yes, I admit it.  Sometimes I get pleasure from strange things, and I'm teaching my children to do the same.  It's so much fun!
Email Post
Labels: Daily Life

Herding Grasshoppers said…
That's fascinating! We'll have to try it, as I'm not much of a spider-fan either!