I often feel that it's selfish to pray for certain playthings for my kids.  They have so much already!  But, Steven really, really, really loves trains.  Every time we are anywhere with a train set, he goes nuts.  So, I confess, I prayed for one for him (and I think Doug did too).  It was a quick, "Lord, this is something we know we can't get him, but if someone's kids outgrow theirs, could you guide them to think of us?" kind of prayer.

And that's exactly what happened!

Doug's aunt and uncle had, over the years, invested in a huge set of Fisher Price Geo Trax for their grandchildren.  They have now outgrown said set.  Not wanting to just toss the set into a Goodwill pile, they thought of Steven!!!  I love it!

So, when Doug arrived at his aunt and uncle's to meet up with his mom after the convention, there were two huge bags of train set components waiting for him.  When the kids woke up yesterday morning they saw these two mysterious bags sitting in the living room.  They wondered and looked, and then Steven managed to make out the outline of a train engine through the plastic.  He was ecstatic!!

We celebrated Father's Day early because Sundays are so busy around here, and we had given Doug a new Belgian waffle maker for Father's Day.  So, he and I were busy making waffles and had told the kids we'd get into the bags as soon as breakfast was over. 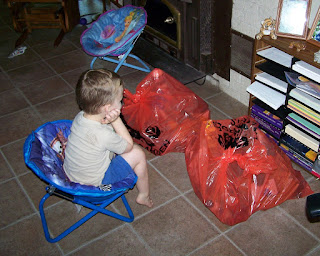 Then he discovered a hole in one of the bags and had to get a better peek! 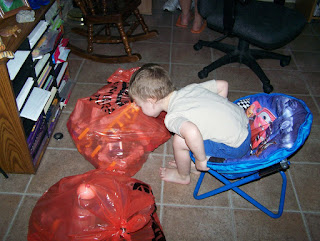 Then he got up for a few minutes to watch the waffle-making process and ended up hurting himself a little.  So, he needed some comfort, both from his bags and his big sister! 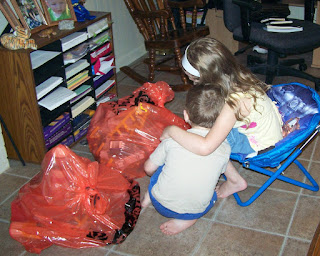 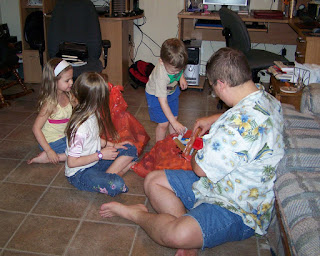 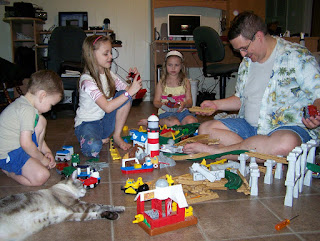 Steven didn't waste any time.  As soon as he had a stretch of tracks, he tried it out! 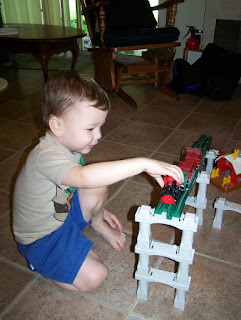 We all jumped in and made the track together (resulting in no pictures of the construction process - sometimes Mama just needs to be in on the action too!)  Once the first track was done, there was plenty of room for all to play! 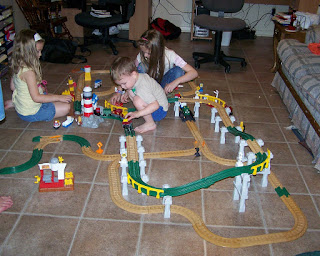 The kids spent hours with this track yesterday.  They have had so much fun!  This morning Steven was up and at it before Doug and I were even up!  Already this morning the first track has been demolished.  Steven is happily playing creating his own track segment while the girls work to make a new double-decker loop track.  It was so much fun to tell the kids that this was something we had prayed for, and to explain to them that even though God doesn't always just drown us in our wants, there are certain things that He loves to bless us with!
Email Post
Labels: Activities and Creations Seeing God's Hand

Beth said…
I love to be reminded of God's provision--even in the little things! I'm also glad to see that Doug's train assembling skills are better than his handwriting skills! :)
June 19, 2010 at 2:51 PM

Doug Hibbard said…
Unfortunately, my rap skills fall far short of my train skills. Or handwriting, for that matter.

Next year, I expect a Resolution "On making motions" that will feature: Be it further resolved, there shall be no wrapping and no more handwritten motions by Doug Hibbard.
June 19, 2010 at 2:54 PM

What fun for the kids, and what a great lesson in faith.

It's been a great lesson for me - and for the boys - to pray for simple things, like new pillows, a table for the school room, even Silly Putty. We know God isn't a vending machine, but we also know that He loves us and gives us good gifts :D

PS Curious about Doug's rapping/wrapping??? Ya never know what these southern preachers will do next!
June 19, 2010 at 4:23 PM

There was some guy at the Southern Baptist Convention that made a motion during open business time, and phrased it in the form of a rap.

It was a bad motion, made worse by bad decorum.

I, on the other hand, made a motion, which I then had to hurriedly write out on a clipboard and send a copy of to the presiding officer. They couldn't read part of it, and made the comment that I was the only person with worse handwriting than his.

So, no rap. No handwriting.

And my handwriting could probably elicit the same response.