We have long been wanting to go see the Arkansas Travelers play.  Scheduling has been a HUGE problem for us, though.  Most games don't start until 7:00, and that's just a bit late for kids our age to start watching a game.  I can only imagine the exhaustion and whininess!  It seems that all of the afternoon games are either on Sunday or Wednesday, and that's just a wee bit hard for a pastor's family to swing.  But, this past Sunday we didn't have church on Sunday evening.  So, we made plans as a family to go see the Travs play.  Pretty soon we discovered that we weren't the only ones from our church with such plans!

Although we didn't travel with the bigger group because we had other things we needed to take care of, we did end up with seats in the same section.  It was a pretty fun group! 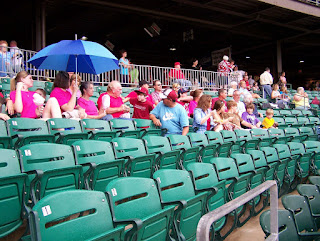 It was raining when we arrived, so there was a bit of a game delay.  But, as the last few rain bursts were finishing the field crew started preparing the field, and by the time the game started the rain had stopped for good.  The rain accomplished what we'd been praying for for weeks - a relatively cool evening!  It was wonderful! 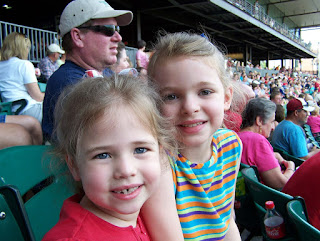 The kids had lots of fun at their first Travs game.  The girls had been to see the Memphis Redbirds several years ago - before Steven was anywhere near the picture - but they don't remember the game.  So, this might as well have been their first baseball game.  It was definitely Steven's first. After a bit of a shaky start, the Travs won 2-1 thanks to two homers!  All in all a fun adventure.

The game ended at 8:00, and fireworks from Riverfest were supposed to start at 9:00.  We were going to be allowed to stay in the ballpark to watch the fireworks, but the kids were already worn out from being there since just before 5:00.  So, we went ahead and left.  We headed over to TCBY for a nice cold treat. 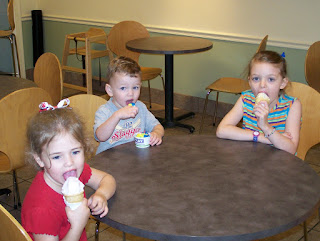 Steven chose a rather colorful flavor that left his lips and tongue exceedingly blue!! 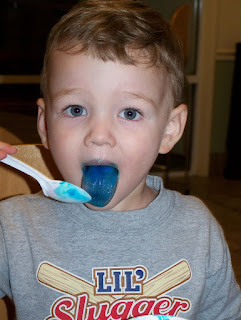 In addition to the fun of a blue mouth, he was entertaining us all with hilarious looks like this one... 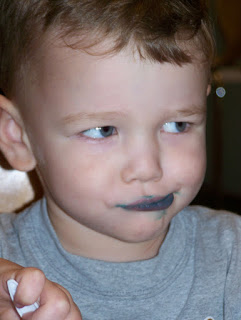 After ice cream, we headed back toward the river and managed to catch the fireworks from the van as we drove around.  A beautiful ending to a fun evening!
Email Post
Labels: Outtings and Trips

Stephanie Kay said…
We LOVE supporting our local minor league team! We're very fortunate to have only a 30 minute drive to the stadium so we can do those night games and still be home before it's too late.
June 7, 2010 at 1:04 PM