After spending two hours on school planning Saturday afternoon/evening and only getting things lined up for Steven (I hadn’t touched the girls’ stuff!), I decided that this just wasn’t going to cut it anymore. I knew I had to just take a week and figure his stuff all out. Doug suggested I go ahead and take this week.

So, Monday morning I waited until the kids were done with their chores and school time had rolled around (because I’m mean like that). Then I called all three kids to me and announced a week off school. I don’t think they believed me at first! Of course, further proving my meanness, I then laid down the ground rules.

That was it. Two simple ground rules. And it has worked! I have been amazed! But, maybe simply giving them my expectations – and the consequences of not meeting them – in advance was what they needed. It’s been a great week! 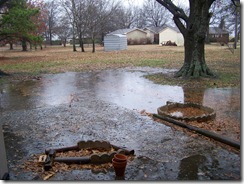 We had a rather wet start to the week (can you tell?) followed by extreme cold (no snow), so the kids have had to entertain themselves indoors. Which has, apparently, not been at all a problem! 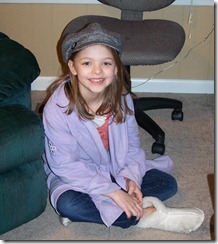 agitated and tired. It has been a consistent theme this particular week of the month for the past four months, I think. Ah, the joys of parenting girls! But, I have nailed down when to expect it (although I haven’t clued her into that secret yet), and I have shared with her tricks for dealing with it. So, when she shared how she was feeling, I reminded her that she just might need to walk away from her siblings when the agitation started to build up. She’s done that quite well, spending most of Monday and Tuesday by herself reading – and doing it quite contentedly, I might add! By yesterday she was ready to happily join in with her siblings and play beautifully.

Angela and Steven have had a blast this week! They have played Legos, Legos, and more Legos. I love those things! There’s just no 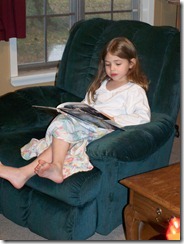 limit to the creativity that can be employed with them, and they can fit easily into whatever the theme of the week happens to be. This week it has been Star Wars. The kids have never seen the movies, but they are familiar with the characters and the storyline. They found a Star Wars book in the library last weekend, so they have been reading it together. Here Angela is reading it to Steven while he builds star ships with Duplos (they have alternated between Duplos and “little Legos”). 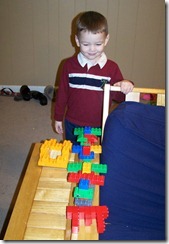 Oh, and Angela has spent the entire week in that dress-up skirt. It’s her long ballerina skirt that twirls beautifully when she spins. A long-sleeve top and a pair of slippers have completed the outfit. She has only come out of it when we’ve left the house.

This morning as I get my work started (blogging is work, right?), I hear all three of them playing quite happily in the back. They sure do love playing together – especially if I threaten them with dire consequences for not playing well together!

Herding Grasshoppers said…
I think your rules are PERFECT!

Oh my gosh, Olivia can't be old enough to be hormonal yet, can she? (I've lost track of ages...)

Enjoy your week off! Woo-hoo!

The Hibbard Family said…
No, she's only 9! Fortunately, it's only the emotional side of things so far. Hopefully she'll hold off on the rest!
February 3, 2011 at 8:32 PM

Glad to hear your planning has gone so well and you are feeling better about school.

I'm starting to think about next year... Wyatt will be a high schooler, and what to do?

The Hibbard Family said…
I saw that on your blog! AUGH! I guess it's really not a bigger challenge, just a different one. Entering high school is almost like starting from scratch because it's a new world, even in homeschooling. I started praying over high school from day one. Do you have any thoughts yet? Any working ideas? My mom used Univ of Nebraska's Indep. Study High School program with us. It was very good and thorough, and it was accredited. I don't know if it's what I will use, but it's definitely a good option. After taking five of us through it, Mom learned all the tricks. So, if you decide to look at anything like that, let me know and I can pick her brain for you.
February 5, 2011 at 10:59 AM

Alli said…
I remember when Mum use to send Tim and I to our rooms for fighting (obviously, when we weren't sharing a room- I had our old room and he was in Ben's room), we would sit in our doorways and talk to each other and play across the hall. Haha...
February 5, 2011 at 1:05 PM

The Hibbard Family said…
I'm confused, Alli. What I know as your and Tim's old room was the one across from Mom and Dad's, and Ben's old room was the porch. Those are a wee bit too far away to be playing "across the hall".
February 5, 2011 at 1:23 PM