What do you do when snow has fallen the day before, it’s bright and sunshiny and the kids so desperately want to go out and play, but it’s so frigid that you can’t let them out yet?

But, fun school! When we were sick a couple of weeks ago, we fell a little behind in science (and only science, amazingly, enough!). Which meant that this week we were still trying to catch up. We had done all of our reading on Wednesday while the snow was falling, so Thursday morning we decided to finish catching up by doing our science experiments and watching our Discover and Do DVD. Fun stuff!

Naturally, they all preferred rubbing the balloons on their heads over rubbing on their shirts… 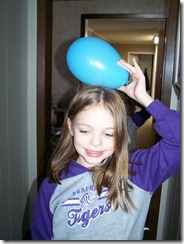 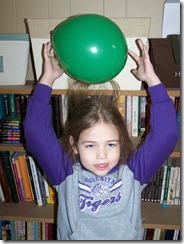 …which naturally meant lots of hair sticking straight up!

Oh, and when you have long hair, that means you can run through the house with the balloon sticking to the back of your head, practically bouncing up and down on the hair hanging down your back. These are the things long hair was made for, right?!!! 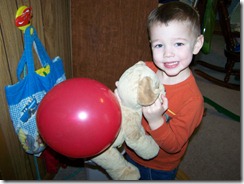 As he ran to show Daddy that the balloon was stuck to Harvey, it fell off and stuck instead to the wall. He was pretty excited about that, too. 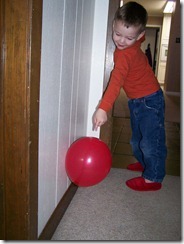 The “stick to the wall” discovery was actually Olivia’s favorite. She decided to try to find out just how long her little balloon would stick. I honestly don’t know what the final determination was, but I do know it stayed on the wall for quite some time while she helped Steven and Angie with their experiments! 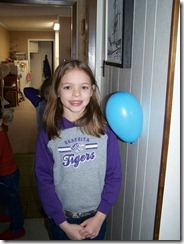 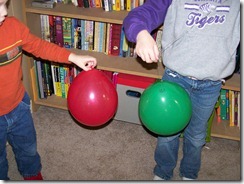 We also learned in our reading yesterday that like static charges repel each other. So, Angie tied a string to her balloon and Steven and Olivia held theirs up to it to see if they could push her balloon around. Sure enough, this is about as close as the balloons would get to each other as long as they had a charge.

Who says school can’t be as fun as playing outside!

And yes, they got to play outside. The Hillmans (some of them at least!) joined us for lunch and then we all headed out for some fun in the snow. At under 20 degrees with a pretty stout wind, we didn’t last much longer than the 10-15 minutes Rachel and I had predicted, but we sure did have fun!  Then on Friday morning it quickly warmed up to the upper 20’s with very little  wind, so my kids went out and played for a good hour or so, knowing that the highs were supposed to get into the 40’s and most of it would melt this afternoon.