Here are some snapshots from Tuesday’s visit in Judsonia…

It’s been a while since we have taken a picture of Grandma and Olivia standing side by side. It excites Olivia to no end to think of being taller than Grandma Polly. She is rapidly making progress in that direction! (Aunt Alli, you’re next!) 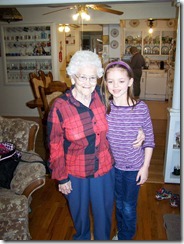 I mentioned the other day that we had a sweet surprise when we pulled into the driveway and saw Ashley’s car. She and Abigail made the stop at Grandma and Grandpa’s on their way to Ashley’s parents’ house. We were thrilled!

Abigail joined the big kids up in the closet over the attic this trip. I think Angie was about the same age the first time she got up there. I remember having to be very vigilant to make sure she didn’t fall. It was sweet to watch Olivia and Angela try to help watch over Abigail in the same way.

And yes, that is Angela in a wig. She wore it most of the time we were there! 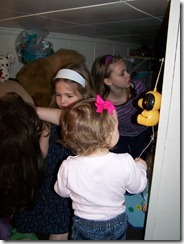 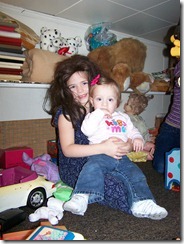 Steven enjoys the closet, but he prefers open space. So, he usually gets his toys out and plays with them in the living room. He was showing Abigail his favorite car. 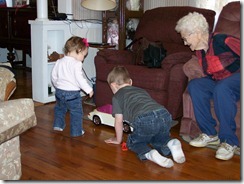 Grandpa has always taken great delight in the grandbabies. My first memory of his interaction with a baby grandchild goes back to my youngest brother Timothy. Grandma & Grandpa made a trip to Jordan right after Tim was born, and Grandpa spoiled that baby rotten by walking him and bouncing him continually! He’s done it with every great-grandchild, too – walking and bouncing. He would take my little ones and disappear, roaming the yard or the house, talking to them the whole time. I don’t think they minded one bit!  Sweet memories to pass on… 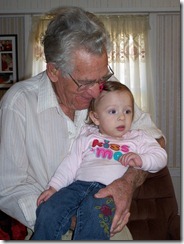 Choate Family said…
It's been a sweet gift to have the time to catch up on your blog. I will soooo miss this peek into your daily lives. Until the end of May, my friend...
February 27, 2011 at 5:25 PM