Just for the Record…

…we live in the south.  Maybe not the deepest of the deep south, but pretty deep. Which typically means winter average temperatures of highs in the mid to upper 50’s and lows in the upper 30’s. When the highs are in the 40’s and the lows near freezing, it’s a cold day. Once a year, we expect that we’ll have a cold snap where the highs will dip into the 30’s, but it’s usually only once a year and doesn’t stay like that more than a couple of days.

1) Our houses are built to keep out the 100+ degree heat, not the freezing temperatures.

2) We don’t buy clothes meant to keep us warm in freezing temperatures because they’re not worth the money for once a year (especially considering the fact that if we get snow, it’s probably not going to be enough to play in). Unless, of course, we’re hunters, and then we buy warm hunting clothes because it can get pretty chilly sitting out waiting for those deer, ducks, and geese.

3) Most of us southerners who like real winter are pretty disappointed every year.

I must say that #3 doesn’t hold up this year! It feels like a real winter, and we winter lovers are, well, loving it! Even so, we’re not really used to it, and that does have some negative effects on the full-fledged enjoyment.

The houses get a little chilly (see #1), and it’s hard to get out and enjoy it (see #2). True, there’s been snow. Lots of it. Well, compared to normal for us anyway! The fact that we’ve now had two good “get out and play” snows and an inch-deep dusting in between is pretty remarkable. But, this last “get out and play” snow almost didn’t get gotten out and played in. When it’s 17 degrees with a wind chill in the single digits or lower, it’s just too cold to get out and play (again, see #2!). We did make it, though (more on that to come in the next couple of days!).

Meanwhile, here are pictures of it falling on Wednesday.  Back yard… 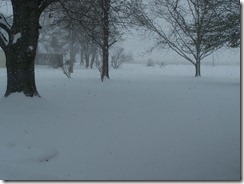 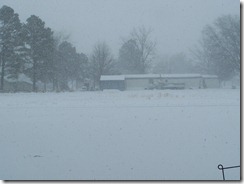 It started accumulating very quickly because the ground was so cold (also abnormal for us – the ground usually isn’t cold enough because typically the temps from the day before would have been in the 50’s at least. Not this week!) We loved this nice little pile on top of one of our kindling buckets that got overturned before the storm hit. 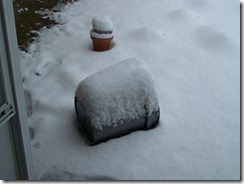 And, you know it’s cold when you look into the garage at the van that has been parked there for four hours (after only being parked outside for about three hours of the storm) and there is still this much snow on it! 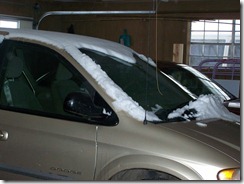 The beautiful part about all this snow? It’s not southern snow. It’s “Yankee snow,” as I’ve heard it referred to several times. The nice fluffy stuff. Just for the record, I really like Yankee snow a lot better than the wet southern snow I’ve known all my life (even in Jordan).

Yep, I’m enjoying this winter. But, I’m still glad to live in the south because we can enjoy it for a couple of days and then say goodbye to it. It’s already up to the mid-40’s today, and by tomorrow we’ll be up to our normal 50’s (a rarity for this winter, it seems!) – maybe even up to the 60’s. And, I’ll enjoy those days a whole lot more thanks to the nice, cold winter so far!

And don't you just love, with homeschooling, that you can decide when and how much of a "snow day" you want to take?!

Enjoy it while it lasts :D