In the great outdoors...summer is fully entrenched! It’s hot, humid, and still. But, we have lovely shade in our yard, so that’s a huge blessing.

Meanwhile, the kids noticed the lack of wind the other day. They’re so used to living on the prairie that life without wind seems odd to them. I never would have thought that to be something they would miss, but they do.

Within our four walls...chaos. Although it is being tamed, little by little. Kids rooms are done. Kitchen is done. We’re getting there.

But, for the time being, I have very little energy. We’ve been so non-stop for about three weeks now, and I don’t have much steam left. So, this morning I’m writing and working while the kids play, read, and relax. Later today I’ll see what I can tame next.

A heart of thanksgiving...for the love and support that’s been poured out all around us, from both Almyra & East End folks and from so many others.

A heart of prayer...for God to be glorified through all we have. There’s nothing like a move to reveal just how much STUFF we accumulate! But, my prayer is that we will use every bit of it for God’s glory. Maybe that means giving it away. Maybe it means inviting others to share it with us. I don’t know. But, I’m praying that, rather than clinging to possessions, we’ll hold all of this loosely and let God be glorified through it.

Random observations...The Choates came to help us on Thursday, and Aaron was able to put into words something that had been on my mind: Houses have personalities. When you move into a new house, you have to learn that personality. You have to learn how to live life in that place.

The last two houses we lived in were very easy to “get to know,” and we were unpacked in no time in both locations. (Oddly enough, they were both built to be parsonages, even though the first of the two was no longer a parsonage.) This one is not so easy. But, we’re getting there, and the change is kind of nice. Forcing us to rethink a lot of things.

Also, we are realizing just how settled we were in Almyra. We used to hang on to things, thinking we might need them were our life situation to change. We didn’t do that in Almyra. When it wasn’t useful for us in that setting, we got rid of it.

There are several things we’ve gotten rid of that actually would have been helpful here. But, it’s kind of nice to laugh and say, “We got rid of that because we were going to live in Almyra forever!”

In all honesty, we knew better. We knew God would probably move us at some point. But, there’s something about the “here forever” mentality that is really freeing for a couple of nomads. It frees us to establish roots and let go of stuff (oddly enough, the opposite would be true for settled people).

Okay, that was a rather long random observation, but it was nice to get that actually typed out.

My silly children...are settling. That makes me happy. They’re missing Almyra folks, but are enjoying getting settled here as well.

Thoughts from the kitchen...time for a menu plan. Way past time. Today will be chicken pot pie, but I need to do some crock pot planning. I don’t love to cook anyway, but it’s especially tough when it’s hot and humid. Yep, I’m a wimp when it comes to heat and humidity.

On my bookshelf...well, Doug unpacked a bunch of books and put them in one of our built-in bookshelves. Other than that, the bookshelves are still piled full of boxes waiting to be unpacked!

Sounds of the moment...the A/C just kicked on. Kids are so quiet I can’t even hear them playing.

From Hibbard Academy...still in boxes!

A favorite thing from last week...this: Moving Again (especially the picture of all seven kids in the hot tub!)

There’s nothing like the blessing of friends who understand moving and know just how to pitch in and do.

Thanks to Joanna, my kitchen was functional almost immediately.

Thanks to Aaron, the furniture was assembled and well placed in the kids rooms by the end of moving day. He even shuffled and rearranged a few times so the girls could visualize the best way to fit both sets of furniture in one room!

It was precious to see my dragging kids light up the moment they saw the Choates pull up. It was like an immediate dose of energy! I love the relationship they have with each other. All seven of them made a multitude of trips up and down the steps, hauling boxes and stuff.

The planner...combining the continuation of unpacking with a flow back into semi-normal life.

Because visuals are fun...Angie made a pretty braided bun the other day. I love her hair! 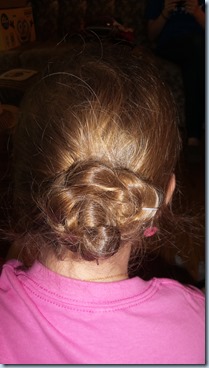 And WHEW! I'm tired for you! Ann, I absolutely loved what you said about your stuff - that you want to use it ALL for His glory, whether that's using it yourself, sharing it, donating it... love that attitude!

And you know what I heard about letting go of stuff (even stuff you might wish you had back later...)? Think of Goodwill or Value Village as your nearly-free storage unit. If I gave away something I could use later, I can probably buy it (or something like it) for just a few bucks from a second-hand shop or from craigslist. Just got a "new" shoe rack for our mudroom that way.

Oh sister, hot and humid are a wearying combination. I tend to stereotype the crock-pot as for winter comfort food, but it's a blessing on a hot day, too. I can plug mine in out on my porch to keep the house cool ;D

Wishing you a peaceful time getting settled into your new house,

The Hibbard Family said…
I'm laughing at your comment about Goodwill, Julie - I can't tell you how many loads of stuff have gone there or to Savers. Oh, and a friend was doing a missions fundraising garage sale right about the time we moved, so she got a HUGE load - or two. Meanwhile, we have a friend who is always selling stuff at a flea market for missions trip and adoption fundraising. Love giving stuff to her! :)