In the great outdoors...hot. After a couple of very pleasant summers, we’re back to heat advisories and bathwater-temp swimming pools.

Within our four walls...lots of quiet today. Everyone is rather low-key from a jam-packed June, which is wrapping up with VBS this week. So, today there will be a good deal of relaxing. Oh, and catching up on laundry since we haven’t done any for a few days! Oops!

A heart of thanksgiving...for friends. So many friends – oh, we’re so incredibly blessed with friends old and new! I’m just in awe of the relationships that God puts in front of us.

But, today, I’m specifically thankful for those who re-energize us. Oh how we love all our friends, but we are introverts. So, we frequently need to step back to recharge. But, God still created His children to be social and need one another. Fortunately, we have a Creator who not only made us the way we are but knows what we need even more than we do – and makes perfect provision for those needs! There are certain people He brings into our lives who can help us with that recharge when we need to pull back but still hunger to spend time with others. It still amazes me the way God brings those friends around. And those are the friends I’m especially thankful for today.

A heart of prayer...for a sweet young couple who just found out their unborn baby has heart problems; for dear friends with health issues; for loved ones facing life without the amazing presence of Christ in their lives; for the remainder of VBS; for my wonderful hubby whose voice started to fade on Saturday, and who has since been battling the exhaustion of being pastoral during VBS even with breathing issues and no voice; oh, and for wisdom as we process through what we can and can’t do with this house before we buy it, and for wisdom about purchase timing.

Random observations...three weeks ago today, we loaded a moving truck. Wow, it’s been a packed three weeks…on the heels of a busy May. No wonder we’re exhausted and having through fighting off colds and such!

My silly children...have always been early risers. The earliest to rise this morning was Steven – at 8:00. It was around 9:00 before everyone was out of bed. See previous comments. Yep, that.

Thoughts from the kitchen...it’s hot. And the temperature in the kitchen is three to five degrees warmer than the living room area. That’s about the full extent of my kitchen thoughts for now. In another hour or so, I will have to go further, but for the time being, I’m in blissful denial!

On my bookshelf...Heartbreak Trail, a new YA fiction review book from Susan K. Marlow. Steven has really begun to love her Circle C books. After VBS I’ll get my own reading schedule re-established.

Projects...still processing through the house. It’s really pretty much in order, but there are just those things here and there that don’t have homes. We also are praying hard for a cool snap so we can finally get into the garage without having heat strokes. That will help a lot with finishing everything up. Why, oh why, do we always have to move in the summer? I can only recall one move in our married life that was not a summer move.

School is my other project. VBS this week, but next week I’m going to organize Angie & Steven’s stuff (they’re in the middle of cores right now); label, organize, and familiarize myself with Sonlight’s Core 100 for Olivia, and determine what remains to be ordered for all three hoodlums.

Sounds of the moment...the ceiling fan whirring above me. I’m in the sunroom, which is also warmer than the rest of the house, so I’ll probably either plug in a second fan or move the laptop to the living room this afternoon.

From Hibbard Academy...the kids are supposed to be doing math (Angela & Steven) and language arts (Olivia) for the time being. For the most part, they are working diligently, as long as I remind them. Yesterday we chose a field trip with the Choates instead – definitely a preferable choice over just about anything!

July will continue to be low-key – probably adding in a little more than math and LA, but not a full slate. We’ll probably dive back in the first week of August, once camps are behind us.

A favorite thing from last week...heading back to Almyra for Read’s birthday party. It made my day to see his smiling face as he ran up to the car yelling, “Steven’s here!”

I’d hoped to get a lot of good pictures, but my battery died. I did manage to get this great splash shot of Steven, though…slip-n-slide baseball, with Eric right there at home base waiting to tag the boys “out.” Somehow he just kept missing them! 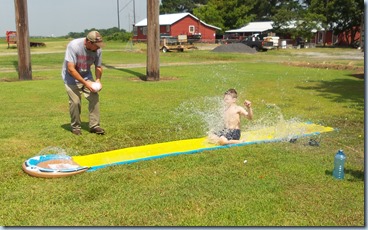 Eric, Jennifer, and Read are just another example of those special friends I’m thankful for.

The planner...well, it’s VBS week, so that’s most of the planner! Although we just HAD to squeeze in that Choate time yesterday – you know, more of that re-energization thing. (Yeah, the editor just made up a word. We do things like that.) 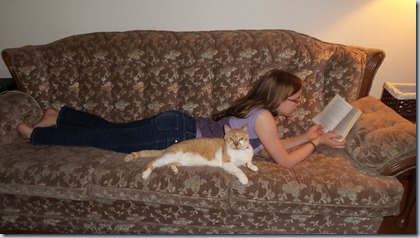 Herding Grasshoppers said…
Well, my gracious, the move, the VBS, and the HEAT sound exhausting to me! (But I'm a "heat wimp" from the north, y'know?) So thankful for friends that "get" you, and for rest when you need it.
A hot kitchen means a good night to grill outside ;D
Is Core 100 the American History core? Gunnar will be doing that for the next school year - we may be reading a lot of the same books!
Hope you get some relief from the heat,
Julie
June 24, 2015 at 11:25 AM