So, Steven has had a fish for a little while now. Well, actually, he’s on his second Betta. This is Zack. I couldn’t get a great picture of him, but he’s beautiful! A vibrant, solid royal blue with gorgeous fins. 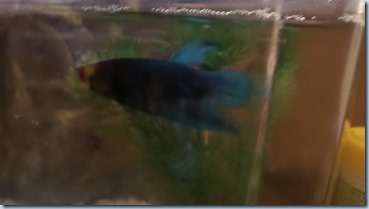 Meanwhile, Olivia decided she wanted a Betta, too. So, Angela and Steven pooled their money and bought a tank and accessories for her birthday. (We figured she could spend birthday money on the fish itself.)

Last night, we went to pick out the fish. Meet Steve: a gorgeous blue Betta with red highlights and white fin tips (named after none other than Captain America himself). 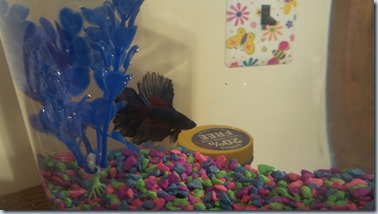 Then, Angie decided she needed her own Betta, and she didn’t want to wait to get one as a birthday gift in a few months. Her choice was an equally beautiful dark blue Betta – not solid like Steven’s, but textured with dark highlights. This is Gary Stone the Betta Fish, named after one of Angela’s all-time favorite Almyrans. 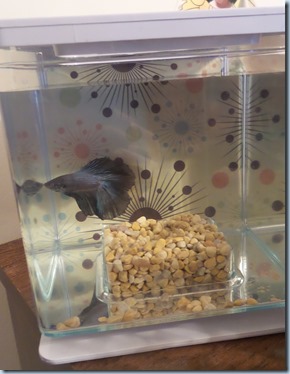 We did state in no uncertain terms that three children might have led to ownership of three cats and three fish, but it will NOT result in three dogs. (Rodents and reptiles are already nixed.)