Skip to main content
Posted by The Hibbard Family March 08, 2008

You know, with a March birthday - even an early March birthday - you don't typically expect to have a white birthday! But, I did! It was absolutely amazing! Yesterday was dark and gloomy, and the snow started around noon. It snowed the rest of the day and into the night without a break, and we awoke this morning to a gorgeous display of bright sunshine on a white blanket. The official measurement for our area was five and a half inches, but in many places in our yard we measured eight to ten inches! It was incredibly beautiful. It was not our typical icy snow, either, but it was real snow - the kind that they have up north where they can have ten inches and still function! :-) The morning temperatures were awesome, too, and we had a wonderful time playing in the snow. Here are pictures from our time.
The girls were knee deep in much of the back yard.
It was cute to watch them trudging through it. 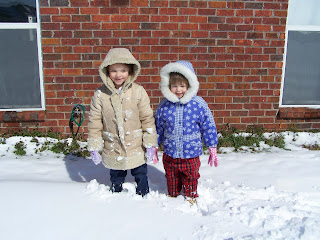 Steven was ecstatic about the snow all day yesterday and even this morning. Being out in it, though, was another story. This morning he wouldn't even get down, and eventually ended up going down for a nap while we played. This afternoon when we were getting back out to run some errands, though, he was willing to at least walk on the sidewalk and stare at and talk about the snow, but he didn't want to go anywhere near it. It was strange stuff!! 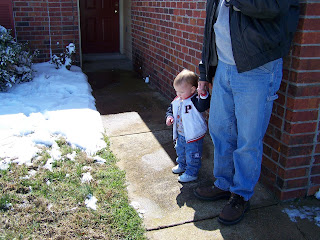 After Steven went inside, weenjoyed the typical snowy day activities such as snow angels.... 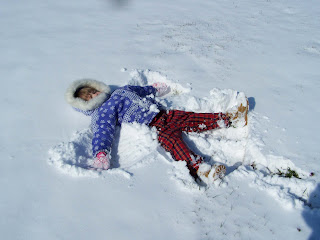 ...and, of course a snow man. It's not huge, but I think it wins the prize as being the biggest we have ever built. 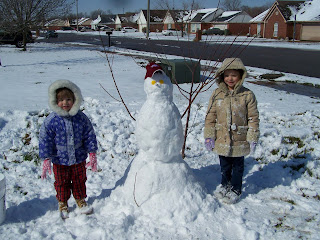 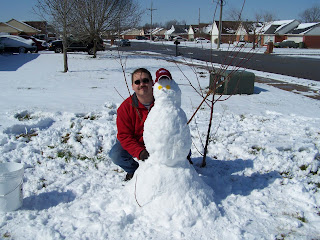 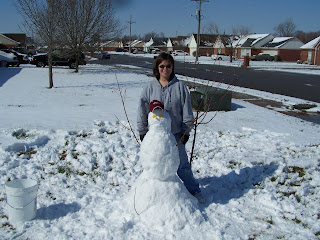 All in all, it was quite the fun morning! The day warmed up beautifully and the snow melted very quickly, so we were glad we got out early. But we were also thankful for the beauty of the rest of the day. We stayed out and about all day long and had a wonderful time. Thank You, Lord, for such an awesome day!