We are learning more and more to see God's hand in everything. This weekend was an example of that. It was just one of those weeks - we were ready to get out of town, just for a day. Do you ever feel that way? Our plans for the weekend kind of fell together at the last minute. We found out that three of my siblings were going to be in Judsonia on Saturday. Then we discovered that we had enough reward points for an overnight stay at a Residence Inn. Then Doug found a couple of free museums in Little Rock and checked out the prices on a trolley ride to one of them. I had gotten an Olive Garden gift card for my birthday, so Doug and I could even get take-out Friday night and have date night in the hotel! And, voila, a very inexpensive mini-vacation weekend was assembled! What a gift from God!

The weekend didn't turn out exactly as we'd anticipated, but it was still so much fun. When we got to Little Rock late Friday morning, we had to run a few errands before getting started on our planned field trip. First stop, as always...Sam's. As we were leaving Sam's, imagine the kids' excitement - especially Steven's - when they saw a real racecar in the parking lot! 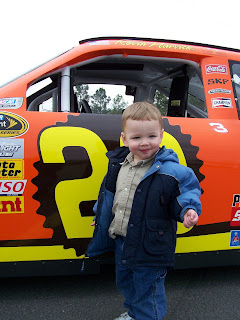 Yes, a real NASCAR racecar on exhibit in the Sam's parking lot. When we rolled into town, Doug was praying about how best to proceed to accomplish the things we needed to do before we headed to the trolley and museums, and he felt impressed that the West Little Rock Sam's would be the better choice and would line up best with the rest of our errands. You may think that's just a coincidence, but I don't believe it for one minute. Choosing that Sam's allowed the kids a delight that they talked about all weekend.

Steven wasn't sure what to think at first, but he was soon thrilled to no end. He looked and looked and looked. The girls soaked it all in, too, asking so many questions about the car. Doug and I learned a thing or two as well as the girls' questions were answered. 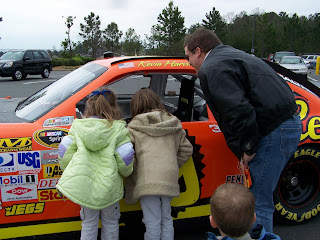 Then on Saturday morning we were headed from Little Rock to Judsonia and had to make a quick stop at the Jacksonville Wal-Mart. We pulled in to the parking lot and right there was the exact same trailer! The car was still safely locked inside - it was still a bit early for the display, so we would not have had the chance to see it if we had not been at the West Little Rock Sam's the day before. Ah, the little things.

After our errands and lunch, we headed to downtown to decide where to park and catch the trolley. We were a little later than we'd expected to be in the first place, and then another unexpected thing happened...the trolley got stuck! If you park along the trolley lines in downtown Little Rock, it is very important to remember to park inside the white lines! Otherwise the trolley can't come through! The spot where we decided to catch the trolley was less than a block from where a Suburban had not obeyed the rules. It was parked just outside the white lines, and the trolley couldn't pass! Oops! After quite a wait - and after a tow truck had already arrived on the scene and was lifting the Suburban to tow it away - the driver finally showed up and moved his vehicle. Then we were able to hop aboard the trolley, but we'd been delayed so long that we weren't going to make it to our museums. We were a bit disappointed to not make the museums, but after promises of another trip later, we settled in for a very enjoyable trolley ride. 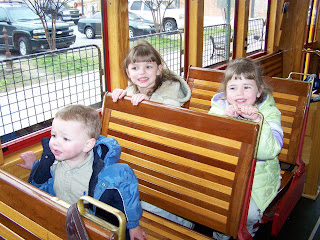 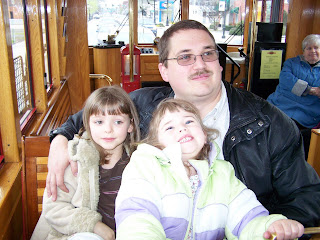 As you can see, everyone greatly enjoyed the ride. We got to cross the Arkansas River twice, see the USS Razorback (an old submarine) and a beautiful paddle boat up close, and pass by several beautiful historic buildings and museums. We all had a great ride. 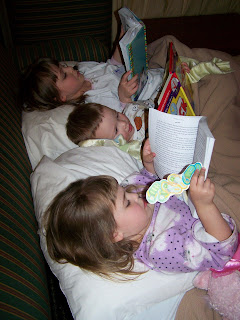 After a few more errands, we headed back to the hotel to feed the kids and settle in for the night. While Doug went to get our date night dinner, the kids settled in for some book time on the girls' bed. Are they not the cutest, silliest things you've ever seen? Okay, so maybe I'm a bit biased. So, we missed the museums, but they'll be there another day. We had a lot of fun with the racecar and trolley, and it was such a blessing to have a free hotel night - in a room with a separate bedroom nonetheless! (The only way to travel, by the way!) We all rested well in preparation for day two of our weekend...the visit with the Browning side. Stay tuned! More to come...
Email Post
Labels: Outtings and Trips

Ruthanne said…
How fun! I would love to know which museums y'all had planned to visit. The trolley is always a winner with my crew - they love it!
March 16, 2009 at 6:05 AM