We finally got a regular exercise routine worked into our family schedule about two months ago, but the two things I've not been able to routinely fit back in with that are blogging and Polish. I think I finally was attentive enough to the Lord's direction to have it worked out now! It's amazing what happens when we listen, isn't it? All that to say, hopefully I will be a little more regular on all of my blogs again. Hopefully! I know I have a nice little list of things I want to blog about, so I at least have plenty of topics! :-)

It's nice to live in a town where you can get almost anywhere in the city limits in well under ten minutes. But, in order to have a town like that there are a few things that naturally must be unavailable. You just can't have it all! For us one of those things is a really good Chinese restaurant. We love Chinese food, and we miss Grand Buffet, the shopping center Chinese restaurant barely two miles from our house in Horn Lake. We've been trying to learn to make our own Chinese food, but we just haven't quite gotten those flavors just right. A few weeks ago while shopping at Sam's, we came across an inexpensive Chinese cookbook. We figured it was worth a try! Last week we picked up some egg roll wrappers and other ingredients and decided to attempt the egg roll recipe. Oh my goodness! I never dreamed homemade egg rolls could be so good! We also used some wonton wrappers to make beef ravioli and cream cheese wontons. Mmmm....And then we made the obligatory lasagna to pop in the freezer for an easy weekday meal. But those eggrolls...Doug and I have been looking for excuses to add them to our meals! And, the kids aren't too big on egg rolls, which means more for us! Woo-hoo!

Then Saturday night rolled around. We were hearing reports from friends back in the Memphis area and from people in more northern parts of Arkansas that snow was falling - enough to really play in. We were again a bit jealous, but we acknowledged the fact that we live in Monticello and 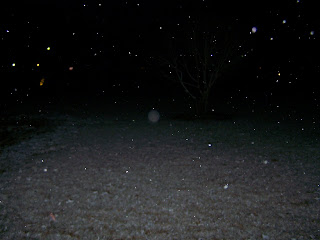 snow in Monticello is pretty unlikely. Then the amazing happened - snow started falling! Doug grabbed the camera and went out to get some pictures while it was falling. We went and got the girls out of bed, wrapped them in their robes, and took them out to see it. It was so pretty! We never did get much - just enough to dust the yard and cover the roof. But, it was also enough to build that excitement over a snowy Saturday evening. 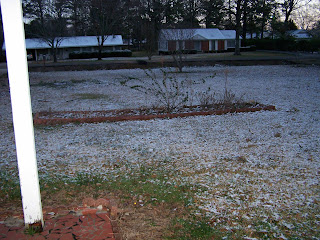 When we woke up Sunday morning, the snow was still on the ground, so I snapped a few more pictures while we got ready for church. What a sweet ending to one week and start to the next!
Email Post
Labels: The Hibbard Kitchen