Skeeter and the Mystery of the Lost Mosquito Treasure 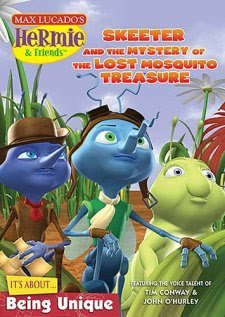 Several years ago our family was introduced to Max Lucado's Hermie & Friends series. So, when the opportunity came along to write a review for a recent episode, I was quite excited.

In Skeeter and the Mystery of the Lost Mosquito Treasure, Hermie's friend Skeeter Skeeto learns that God didn't make a mistake when He created him with a crooked nose. in the midst of a treasure-hunting adventure, he also discovers that his "perfect" and famous brother Sir Sinclair M. Skeeto is not quite as perfect as Skeeter had always believed. Together the brothers finally understand that they both are special just the way God made them, and they are loved as such as well.

The story lives up well to the standard of Hermie & Friends. The message is presented very clearly, but not stiffly, and the story line held the interest of my children all the way through. They laughed and laughed at the silly antics of Hermie and his friends, and they urged Skeeter to use his own gifts and talents to find the treasure they sought.

Once the feature film ended, there was a cartoon short called "Hermie Had a Little Lamb." Although it was cute and comical, my kids didn't seem to get into it all that well. They began to break away from tv time and move on to other things, glancing back occasionally to see what was going on.

All in all, Skeeter and the Mystery of the Lost Mosquito Treasure was a well-made story with a good, solid lesson for children. I'm delighted to have it in our video library!
Email Post
Labels: Reviews