Any of you who know Steven know that he can be a bit timid about things.  He doesn’t like new things, big things, or loud noises.  He’ll talk a big talk about loving trains, airplanes, and tractors, but once he gets up close he’s not too sure.

Well, now we live in farming country.  For the first time in our ministry career, a good number of our church members earn their living by farming.  It’s exciting for us because we get to learn about farming.  Considering how little we know, there is lots of potential there!

Part of that learning will involve new experiences, and on Monday evening we got a phone call offering one of the kids a chance for one such new experience – going for a ride on a combine!  All three kids will eventually get their chance, but on Monday Angie was already in the shower and it wasn’t a good time for Livie to go.  So, that left Steven.

Doug and I debated on who should take him, knowing that he would probably freak out just a little bit at the size and overall experience.  We decided that he might be a little less clingy with Doug than with me, so the two fellas headed out to the field with Mary Ann Stone to go meet up with her husband Gary for the ride.

I was praying the whole time that Steven would not freak out.  After a little while, I got this picture from Doug… 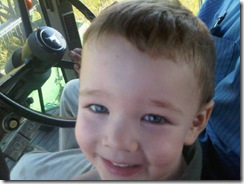 I knew that at least at this point he was having fun!

When Doug got home, I discovered that an amazing miracle had happened.  Not only was Steven never once overwhelmed, but he ran right up to that combine and started climbing the big ladder all by himself!! 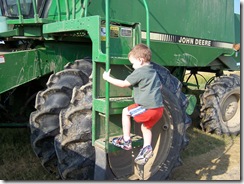 Doug said he had to slow him down just to catch up and get the pictures! 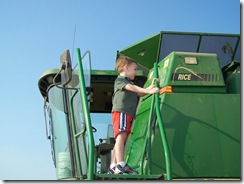 Off they went, busily harvesting some of that rice. 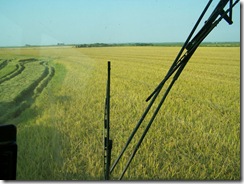 Steven even got to help with some of the controls! 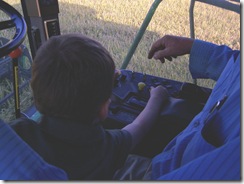 To say he had fun would be a bit of an understatement.  Doug and I are so proud of him for being such a bold big boy!  A big thank you to the Stones for the ride!

Herding Grasshoppers said…
Hurray for Steven, and a fun welcome into your new community :o)

I remember as a child spending a day riding along with a church member who drove a log truck. Fun! And a little, um, exciting on those narrow, windy mountain roads.

The Hibbard Family said…
Julie, I definitely have a new respect for you! I'm not sure I'd be able to handle a log truck on some of the roads they brave!!!
September 8, 2010 at 3:46 PM