Continuing with the “catching up” mode of blogging, here are some highlights from Christmas.

Alli arrived Christmas Eve morning while I was decorating her birthday cake.  No, she’s not a Christmas Eve baby – her birthday was December 15.  But I had promised her a froggy cake (she loves frogs) if she came to spend Christmas with us.  Yes, I’m conniving.  And it obviously worked, to our delight!  So, we had her belated birthday celebration over lunch on Christmas Eve with her froggy cake.  And yes, I’ll admit it – I’m pretty proud of the fact that the frog turned out just like what I had envisioned! 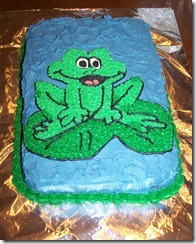 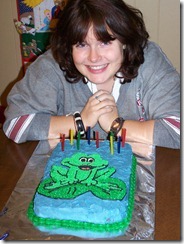 That night we had the best Christmas Eve service I’d ever attended.  We really didn’t expect much of a turnout because we knew a lot of people had long-standing family plans for Christmas Eve.  We understood that, and we were willing to do the service even if it was just us and a couple of other people.  We were shocked when nearly 50 people showed up!!  It was a really precious service that combined congregational singing with Scripture reading and a few stories and ended with the candle light to “Silent Night.”  Beautiful.

We came home and introduced the kids to fondue for a late Christmas Eve supper.  Then everyone headed to bed.

The next morning we really expected the kids to wake us up.  But, when we got up at 7:00, there was not a single stirring!  It was 7:45 before the first child appeared.  The thing that was the most precious to me was that there was no begging to open presents.  Instead there were snuggles.  Angela headed to Alli’s lap while Steven and Olivia joined me in the recliner. 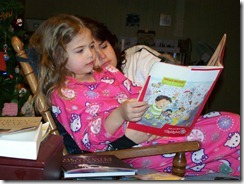 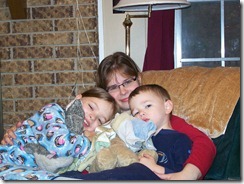 We snuggled until the breakfast casserole that Doug had already put in the oven was heated through.  Then we enjoyed a relaxing breakfast and the lighting of the advent wreath before digging into the presents.

Then came the chaos! 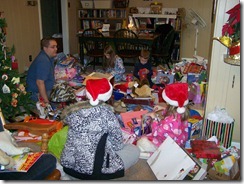 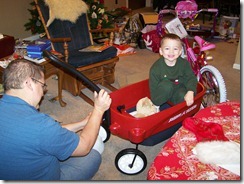 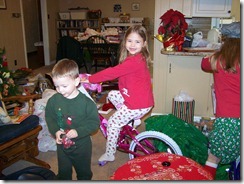 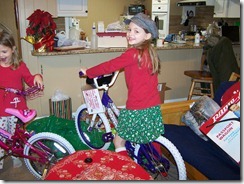 Followed by Christmas Skype video chats with Grandma & PopPop and Nanny & Papaw.  So thankful for technology! 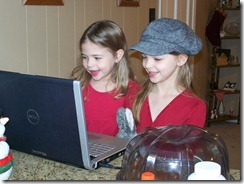 We enjoyed Christmas dinner with the extended Hillman family, and then came home for a relaxing afternoon and evening.   Yes, it was a beautiful Christmas Day.