I’m almost caught up with Christmas posts!  The Monday after Christmas we packed up and headed to Monroe for the extended Hibbard family Christmas.  Steph & Morgan had arrived Sunday and stayed through Christmas dinner Monday, and we arrived a little before dinner Monday to stay through Tuesday.  It made for a nice overlap without cramming too many people into too small of a space. 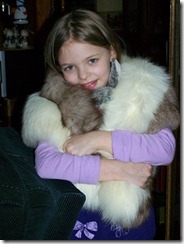 Grandma let the girls have a special treat for the day – she pull out her real fur stole and let them wear it for a while!

Meanwhile, Angie and Morgan decided to display their fashions by trying on Grandma’s different hats. 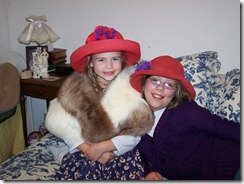 Later Angela holed herself up in Grandma and PopPop’s room with ALL of the Red Hat hats, arranging them all neatly around her and trying them on in an orderly fashion.  Yes, she was in priss-pot paradise! 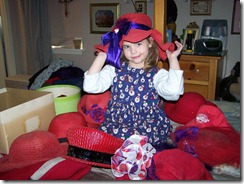 Steven participated in the silly dress-up theme on Tuesday – his has of choice was a lampshade. 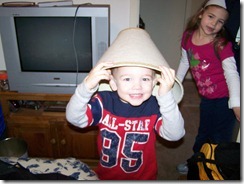 I ended up without very many pictures this time around, but it is safe to say they had a lot of fun on Monday.  This was proven by the fact that we didn’t hear a peep from them after they had book time Monday night!  They were worn out! 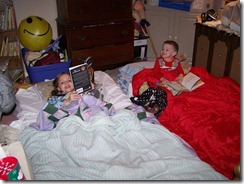 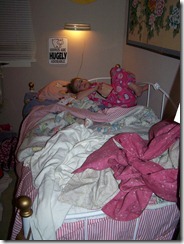 Coming up next, the final installment of the Christmas posts – our Tuesday outing and trip home.  Then next week we’ll hopefully be back to slightly more real time blogging!