Steven is obviously suffering from third child syndrome.  His big sisters know and are able to do so much more than he is, and that's tough!  He was being so diligent to learn his letter sounds over the fall months, and he kept begging to learn how to read.  So, I had told him that after Thanksgiving he could start learning how to put letters together to make sounds.  He was delighted!  Naturally, there were a lot of interruptions in the school schedule between Thanksgiving and Christmas, so progress was slow.  But, I really didn't want to push him too much.  After all, he's not even 4 1/2 quite yet.  Since Christmas we've continued to work at his pace.  On the days when his brain just doesn't work that way, we calmly put it aside.  Although, the first time that happened he cried because he wanted to be able to read so badly!  But, we did something else fun, and he was okay.

Yesterday I pulled out the first little Step Into Reading Phonics First Steps reader that both of the girls started with after learning their sounds and learning the basics of consonant/vowel blends. Those books just seemed to make reading "click" for the girls after learning the initial basics.  So, I read it to Steven and showed him some of the words yesterday.  Today we pulled it out and I expected that I would be mostly reading it to him again.  I was wrong.  He read it to me!!  He's definitely relying heavily on some memorization and the pictures, but he's definitely really reading as well.  And he's proud of it!  He can't wait to try book 2!

He let me video him reading his book...


At lunch he read it to Daddy. 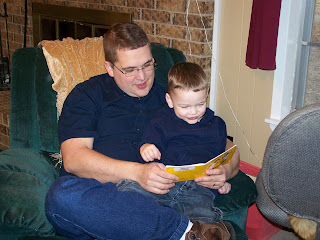 A whole new world is about to open up for our big boy!  So proud of him!
Email Post
Labels: Growning and Learning Hibbard Elementary

Herding Grasshoppers said…
Oh Ann, that is AWESOME! His laugh is absolutely contagious! The reading is great :D

I remember Wyatt, one day when he was four or five, saying to me, "Mama, I'd like to learn to read today."

Well, it wasn't quite that quick, but once they get excited about it they seem to just take off!

Choate Family said…
Ann,
People (especially here in the Solomons) are always so amazed that are kids learn to read at the age of 4. You guys obviously live in a "book-rich" environment (and a smart gene pool doesn't hurt, either!). God made our incredible brains to work so very well!
Love,
Joanna
January 22, 2011 at 2:11 PM