The Tuesday morning after Christmas we got up and had a relaxed morning and then headed our for some museum entertainment.  Well, I say it was relaxing.  The kids were chomping at the bits from the moment they heard the word museum, but it didn’t open until 10:00.   But, it was worth the wait.

The museums are all connected to the Biedenharn Gardens where we took the girls’ birthday pictures a couple of years in a row, but we’ve never actually toured any of the facilities before now.

Our first stop was the Coke museum.  (It’s the only thing I actually got pictures of.)   Joe Biedenharn was the first one to bottle Coca-Cola, allowing consumption to spread outside of soda shops.  In the Coke museum we were walked through the history of bottling – quite a fascinating journey! 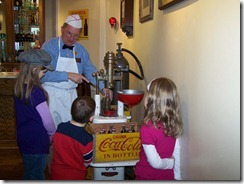 The soda shop was the primary attraction, but there were also a few other pieces of Coke memorabilia… 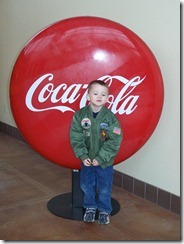 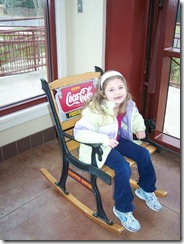 …including an old Coke delivery truck. 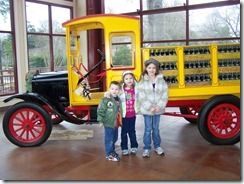 Next stop was the Bible museum.  Joe Biedenharn’s daughter collected Bibles and biblical art.  The museum combined her collection with the art and memorabilia of other collectors.  The museum actually had a fire several years back that closed the museum for quite some time until the property and collection could be restored and returned to display.

Finally, we toured the Biedenharn house itself, each room decorated with a different Christmas emphasis.  It was beautiful!

After a fun tour and an enjoyable lunch with Grandma and PopPop, we headed home via Monticello and the dentist.  Angela had cracked a filling and tooth on Sunday and was in need of some dental work.  They were so gracious to work us in with their orthodontic patients, and after about two and a half hours at the dentist we pulled out of Monticello with a brand new shiny cap on her tooth.  The timing was a blessing, considering we were making the trip anyway and didn’t have to worry about trying to figure out where to take her here (and get her records transferred in the process), and also considering God had already provided every penny needed in the form of Christmas gifts.  He’s good!

Our return home Tuesday night officially ended our Christmas celebration.  All fun, but nice to get back to routine!