Yesterday Olivia and Steven were under the weather, so I kept all three kids home from church.  We vigilantly watched for the beginning 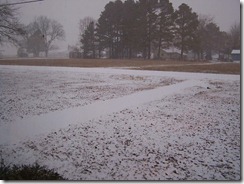 of the winter storm that was coming through, expecting to start with our typical sleet.  Instead, we skipped the sleet and went straight to snow – the fluffy, light, “real” snow!  It started around 1:30, and within 15 minutes the roofs were white and a light dusting was starting to accumulate.  Within a couple of hours, the ground was covered. 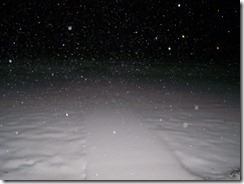 By the time we went to bed, we had a nice blanket of snow over three inches deep and it was still coming down, although it was obviously slacking off and was set to stop before too much longer. 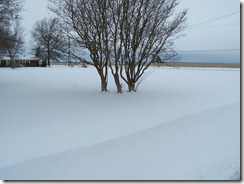 When we woke up this morning, we realized that little more had fallen – just enough to level everything off and cover up the last of the leaves that had been poking through the snow. 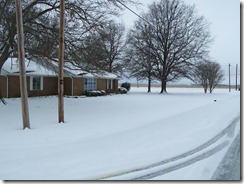 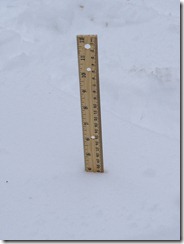 I took the ruler out just out of curiosity.  It was pretty consistently four inches deep throughout the yard, a few places measuring three inches.  All fluffy snow.  All the way down.  Nice!   The roads and concrete were slick under the snow, but we didn’t have the layer of ice like we normally do.  Just enough of it melted today, though, to freeze back over tonight and create a mess!

But, who cares about road mess when we don’t have to go anywhere and there’s gorgeous, fluffy snow to play in!  So, we bundled up and headed out! 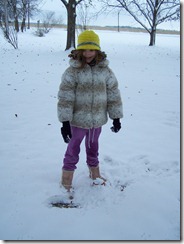 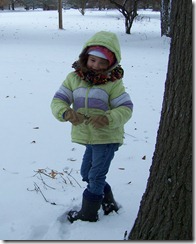 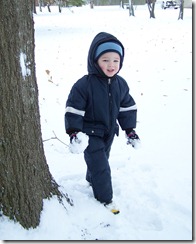 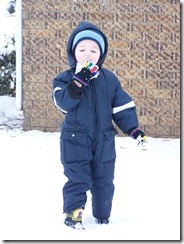 The girls built itty bitty snowmen.  Doug took a work break toward the end of our time outside to come help build a snow tower!  We’ll probably go back out this afternoon and round out the tower to make a bigger snowman. 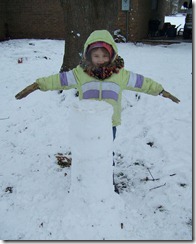 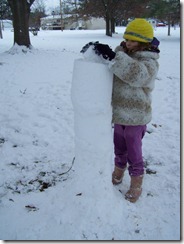 But, we just didn’t want to have a relapse of yesterday’s cold symptoms by staying out too long (and the girls’ pants didn’t stay dry nearly as well as Steven’s awesome snow suit!).  So, we kicked off our boots… 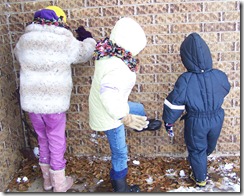 …and headed inside to dry everything out, drink some hot chocolate, and snuggle on the couch for some read aloud time. 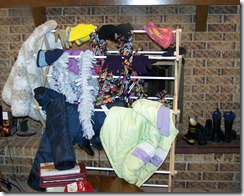 Herding Grasshoppers said…
Hurray for snow days! We have an inch or so left from last Sunday's snow, and I can see some more coming from the other end of the lake...yippee!