Life is just fun sometimes. Shall I give you some examples?

The other day when I went into the kids’ bathroom to help Steven with something, I found this. 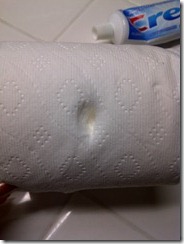 Yes, it’s a roll of toiler paper with a finger hole in it. The hole goes much deeper than it looks in the picture. I asked Steven about it, and he didn’t know anything. So, I asked the girls about it. Olivia confessed with a sheepish grin. When asked why, she said, “I wanted to see how many squares of toilet paper it took to go all the way around the roll.” She then proceeded to unroll the toilet paper a bit to show that she could count the squares between the holes for her answer.

After regaining control of myself, I challenged her to pay attention to see if the count stayed the same the closer she got to the middle of the roll. Then I promised an enormous squishing if she did it again!

Then this morning I walked into Angela’s room to find some of Steven’s dress clothes in her little chair: a white button-down shirt, a sport coat, and a clip tie. When I asked her about it, the same sheepish grin that had been on Olivia’s face showed up on Angie’s.

“Yesterday morning when we took the Star Wars pajama shirt off of Napoleon, we thought we’d put some dress clothes on him so he would be appropriately dressed for Sunday.”

Napoleon is a life-sized stuffed emperor penguin. He is technically Steven’s but Steven generously shares him, and he is well-loved by all three children. Typically the poor penguin gets dressed in various dresses and girl clothes. But, the kids have discovered that Steven’s clothes fit Napoleon, so he is finally being dressed a little more appropriately.

For some reason they never did get the dress clothes onto Napoleon. Maybe because we had to leave for church. So, no, I don’t have any pictures. I’m sure, however, that at some point in the future the clothes will once again find themselves out of the closet and on the penguin.

Steven continues to be hilarious, but I have completely forgotten the funny story about him that I was going to share. So, it will have to come later. Instead, I’ll share about his job! Yes, my four-year-old is now employed – and no, it’s not by mommy and daddy. Every Friday he will earn 50 cents for retrieving a trash can and returning it to its rightful place after the trash truck comes. I think he’s pretty proud of this new responsibility! He will start this coming Friday.