Outside my window...currently cloudy, but still rather bright as the sun peeks out now and then; deep “puddles” (if they can still be called that at that size!) from all of the rain we’ve had recently; thick, tall grass rising above the standing water – we can’t mow because it’s far too wet. The days it has finally dried out enough to mow, we’ve been gone for one reason or another, and then it has always stormed again the very next day.

I am thinking...about the to-do list. Not making as much progress as I’d hoped, but I am getting the stuff that HAD to be done today accomplished.

I am thankful for...Jack the cat’s recovery. He was very sick last week, and we honestly didn’t expect him to live through Thursday night. I’m still not sure he’s eating, but he is mobile, drinking, and purring again. All good signs.

I am wearing...denim capris, red sleeveless top, bare feet, hair in a ponytail.

I am creating...nothing right now. I need to start on Olivia’s second gown, and then get busy with her birthday present.

I am remembering...flooding from three years ago about this time of year. Wonder how this year’s flooding will compare.

I am going...to start posting these “observations” on Monday again instead of Tuesday. For a while Tuesday was working better for me, but now I think Monday will be easier.

I am reading...In the Company of Others by Jan Karon, Jane Eyre by Charlotte Bronte, and Praying for Your Future Husband by Robin Jones Gunn and Tricia Goyer. Yes, I’m a little ADD in my reading right now.

I am hoping...the next round of storms is mild and does not dump as much water on us as is expected. The expected amount could be disastrous for our farmers.

I am hearing...the kids playing on the Wii behind me - their exercise on days like today when going outside is just not possible.

On my mind...those in AR and MO who are getting more rain or are closer to the rivers than we are and are dealing with some major flooding.

From the learning rooms...history: early discovery and uses of oil, beginning of catalog sales (Montgomery Ward and Richard Sears); science: more about atoms, molecules, and elements, including molecular movement and how that affects the state of matter; reading Caddie Woodlawn (love that book!) and Old Yeller. Still working on the week’s preview and specific assignments, so I’m not sure about LA and math yet.

Noticing that...my chosen cup for the day doesn’t hold much water. Love the cup – don’t like having to refill it so frequently.

From the kitchen...chicken quesadillas today; still need to plan for the rest of the week, but I know that tomorrow will definitely include beef.

Around the house...lots and lots of Easter candy. Lots and lots and lots. And yes, I am being good so far. I’ve only had one small piece of Reese’s candy and one little caramel egg. And I’m going to stay out of it for the rest of the day.

One of my favorite things...a good pencil. Okay, so that’s really trivial, I know. But, I am trying out some Bic mechanical pencils right now, and they are awesome!

A few plans for the rest of the week...trying to keep from floating away. Otherwise, I think it’s a rather uneventful week – school, church, household tasks. That thought makes me smile.

Pictures worth sharing...my sister’s pictures of the flooding in NW AR are much crazier, but this is what it’s like in our neck of the woods right now.

Between the house and the garden – most of this is about 2-3 inches deep. 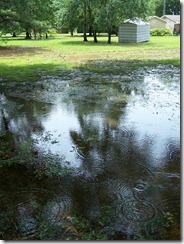 The garden: the standing stalks are our corn. Nothing else had a chance to sprout before the weekly flooding began. I doubt we’ll have much of a harvest this year. 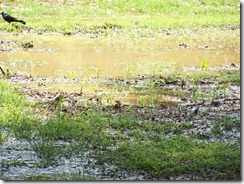 Another round is expected to hit this evening sometime. The last prediction I heard was six inches of rain in a very short span of time.  I guess we’ll see!

But I bet your growing season is longer, yah? Maybe you can still have a garden if you plant later?

We had frost on Saturday, so still too early to plant here!

The Hibbard Family said…
Julie, we're still such novices at gardening and farming, but we're learning! I've found out recently that yes, in "normal" years we could replant later without a problem. (In fact, several of our farmers haven't even begun their personal gardens yet.) My understanding is that the main thing that can thwart late gardening here is the timing of summer heat. When it waits until late July or early August and doesn't last long, the crops are much better off. But, last summer we hit the 100's in early June and stayed there for most of the next three months. Crops and late gardens suffered badly. So, it's always a wait and see game. Ah - life in the farming world is an interesting thing!
April 25, 2011 at 6:55 PM