Skip to main content
Posted by The Hibbard Family April 09, 2008 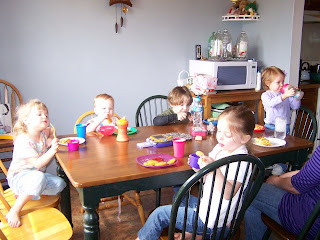 Once again, the time rolled around for our monthly visit with the Shawas. When we moved in next door to the Shawas in September of 2002, Olivia was the only child among the two families - and boy did she know it! She was spoiled rotten, especially by her Uncle Jason! :-) Now there are five children, with the youngest being a little older than Olivia was when we met the Shawas. What was cute was that Emily was quite attracted to the oversized Pooh pillow Jason and Charlene had bought Olivia when she was Emily's age. Ah, time flies. Seeing them all five gathered around the table for lunch was truly a precious sight - seeing the blessings of these children the Lord has granted to us! 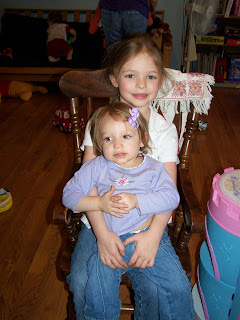 Every time we get together we try to get a picture of Olivia and Emily. Aren't they sweet? It used to be easier - little Emily didn't have a problem sitting in someone's lap. As she's grown older, though, we have to catch just that right moment. It's worth it, though! They're so precious! 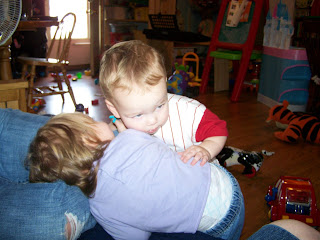 Then, of course, Steven had to get HIS loving in again. Poor thing - he really has to work for his hugs! 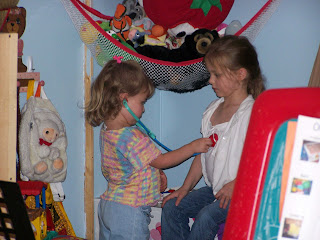 Meanwhile, the girls decided to play a bit on their own. Angie was the doctor and Olivia was the patient. They had a great time - Angie continually reminding Olivia to come for her next appointment!

Steven is proud of himself - he has learned how to respond with motions and actions to "If You're Happy and You Know It," and he thinks it's the greatest thing in the world! At bedtime he typically has a specific song in mind that he wants me to sing. If I start the wrong one, he'll say, "No! Sing song!" I'll keep trying until he either snuggles down or grins from ear to ear - either one the signal that I've finally found the right song.

Angela has her Spring Program at MDO tomorrow. Olivia will be handing out the programs for it. She's excited about her role! Please pray for us that all will go smoothly and, above all, Christ will be glorified.
Email Post