New Year's Day with the Hibbards

Okay, so this first picture is just cute! :-) Steven likes the froggy towel his sisters made him for Christmas, and he couldn't wait to wrap himself in it after bathtime the other night. Of course, that could change with any given bathtime - he's fickle sometimes! 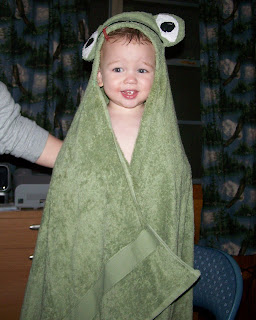 I hope each of your have enjoyed your week as we have! We welcomed in the New Year in our traditional way - in bed! :-) Yes, call us old fuddy-duddies, but it sure was nice to get to bed at a very decent hour and be able to sleep in a few extra minutes as well. When you know the kids are going to wake you up around the same time every morning regardless of when you or they went to bed, late nights tend to be avoided whenever possible!

We originally intended for Jan 1 to be another routine day - Doug was going to go to the office for at least a while, and we were going to have school as usual. But, we changed our minds when we discovered that there was to be an Iron Chef marathon on the Food Network!

We started our day with a delicious breakfast of homemade cinnamon rolls and Doug's incredible omelets (we made breakfast foods our theme for the day). We then enjoyed a nice trip to Wal-Mart to pick up a few items for our supper and to get out of the house a bit - it's amazing how calm Wal-Mart is at 9:30 on New Year's Day! That outing was followed by watching the Rose Parade and eating a light lunch. We as a family hate to have the TV on for long periods of time. So, we selected the Iron Chef episodes we really wanted to see and spent the rest of the time in the kitchen! Yes, we as a family seem to really love the kitchen!
My men in their matching t-shirts enjoying Iron Chef. Aren't they cute? The shirts say "Big Slugger" and "Li'l Slugger, by the way. 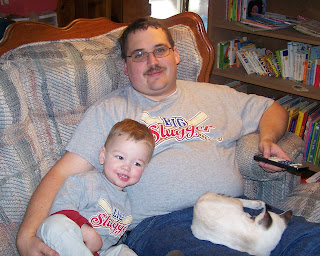 Steven loves to put the silverware away once it's clean. Up until yesterday, he would always just grab it and reach up to throw it randomly into the drawer. But, yesterday he was craning his neck to try to reach up and see where each piece went! So, I grabbed him a stool so he could reach. He put each piece away perfectly! What a big helper! 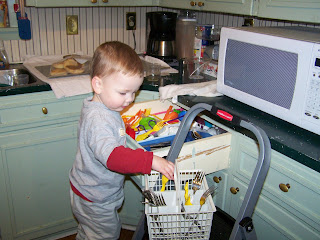 We made homemade tortillas to have on hand. Time-consuming, but oh so easy and definitely worth the time invested once or twice a month to have a batch on hand! Olivia helped me roll a few of them - she'll need to practice a bit more on that to get them really flat, but she's learning! Then we moved to the stove where she became quite the expert at cooking them just right and flipping them perfectly! 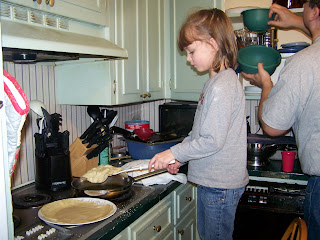 And, our last task of the day was to refill the bucket of sifted flour to be ready for the pie crusts we need to make this weekend. I have great helpers, don't I? 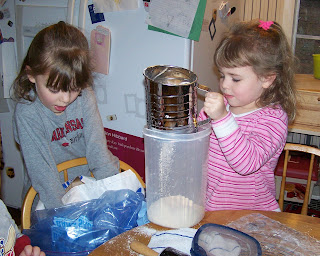 We finished the day with our breakfast for supper and one last episode of Iron Chef. Doug made biscuits and gravy (except for the ones we had butter and honey on! Yum!), scrambled eggs, bacon, and hashbrowns. Quite delicious! The Iron Chef episode was Battle Wild Boar, something that the girls thought was absolutely perfect in honor of Asterix and Obelix, our favorite comic book characters. All in all we think it made for a very enjoyable way to start 2009!
Email Post
Labels: The Hibbard Kitchen

Choate Family said…
I think our families are twins separated at birth! Sarah is our master tortilla maker, and we love Asterix and Obelix! Miss you guys and looking forward to watching your watching your family in 2009.
January 3, 2009 at 2:27 PM