My One Little Craft

I didn’t do much in the way of sewing this year since I was helping the kids with their projects. Much earlier in the year, Doug started finding Lego kits on sale and began stockpiling them for future gift-giving occasions. That meant that for the first time in a while, their major gifts from us would not be homemade! Olivia was delighted with her earrings, Angela got a new bigger girl Bible to replace the one that was literally falling apart in her hands each day, and Steven got his first watch (a Lego Star Wars watch, no less!). And then they got Legos. Very exciting!

But, there was one project I was determined to tackle this Christmas – hair bows. I wanted to make some for my niece Abigail, but I’m just not great with ribbon bows. I was going to do my best…until I found an easier way.

I went to the Christmas party at The French Seam, our local Bernina retailer, and I saw these demonstrated. (If you click on the picture it will take you to the Amazon link – no I don’t get a kickback if you decide to order it. There are also different styles of petals.)

I couldn’t help but think that would make bow-making so much easier. I was right! I ended up making a whole pile of bows for Christmas! Each bow took me about 20 minutes from start to finish, and I could make them with scraps of fabric. Once the bows were finished, I hot glued small alligator clips to the back of each one. 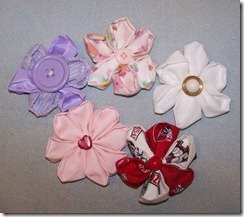 I made these two to go in Angela’s stocking: 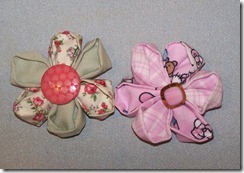 Olivia got the most, though. She was lacking in the area of stocking stuffers, so I made her a bunch of bows. She thought she was outgrowing them until she saw me making these! Then she decided she would love to have them to pin to her hat. So, my first thought was to turn them all into pins. But, then she started wearing hairbows again. So, I thought having the option would be handy. I glued magnets to the back of each of her bows, then glued magnets to the alligator clips and pins. 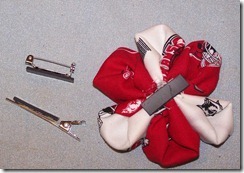 It was a good idea in theory, but in implementation, the magnets weren’t strong enough. I want to find stronger magnets and stick with this plan, but until I do, she’s designating some to be either pins or hairbows, and there are a couple that I’m making extras of.

So, that was my “big” project for the season. Now back to the everyday stuff. Some time next week I’ll post a picture of the “accident” skirt I made for Olivia last weekend!