It seems that every school year we start off at a table. We do have a beautiful small table that works well for groups lessons in school, but it’s a little too small for everyone to spread out for independent work. And, we don’t have a desk or table space for each child. So, as the year wears on, it seems we spread out…all over the house!

A few months ago I instituted the system that has been the most effective yet for our homeschool – crates. All of us have crates. Small ones for pencil cases, glue, scissors, crayons, etc. Medium sized ones for books. The larger ones are for storage and organization. All of the kids’ individual books are kept in their crates, so when it’s time for school they just have to grab them and go. When it’s time to clean up, they just put everything back in their crate. I have two crates. One has all the books we need for that particular day, and the other one has everything else that will be needed for the week. I just stock it up at the beginning of the week and make any necessary switches in the other crate first thing every morning. It has been awesome! And so flexible.

So flexible, in fact, that I have seen the kids working in all sorts of locations. I decided to start snapping pictures of some of the different places they work.

Olivia is pretty predictable. It’s typically either a couch or her bed. 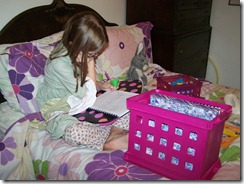 The variation comes when she has company. She usually works better alone, so she separates herself from the other two. But, occasionally she is in a mode where she can be with them and still focus well.

This was a cute day…they had all lined up their crates at the foot of the bed and chose to do math all at the same time. (Hmmm…I could have been a Horizons Math advertisement that day!) 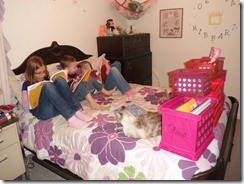 I never know where I’m going to find Steven and Angela. The one predictable thing with them is that they are typically going to be found together!

This is a pretty common sight – in the open space in Angie’s room. 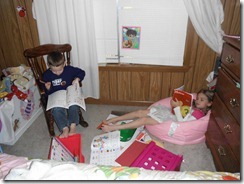 This is what happens when they want to be in the same room but need a little separation. Here Angie is in the narrow space behind Steven’s bed on his bean bag. Steven’s on the other side of the bed on the floor (thought I had a picture, but apparently not). 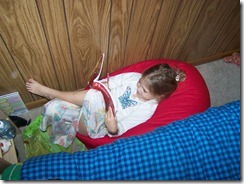 Other times, just being in the same room isn’t enough! 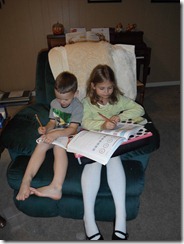 I’m sure there will be more locations and more pictures to come! My children are like their parents – they need regular change. If they can satisfactorily find it in switching up where and how they do school, that works for me!
Email Post
Labels: Hibbard Elementary

The Hibbard Family said…
We really like the crates. They hold books, but they also hold file folders for papers or homemade booklets. It has worked SO well for us!
November 22, 2011 at 9:11 PM