Skip to main content
Labels
Posted by The Hibbard Family May 11, 2011

This year through 2015, museums and groups all over Arkansas are hosting various events commemorating the 150th anniversary of the Civil War. The first event we heard about was one in the little community of DeValls Bluff. We never dreamed that a short while after that event, much of what we drove through would be under water. But, the Saturday before Easter it was quite the lovely day. A little overcast, but no rain.

As much as Doug and I could’ve soaked up every speech and reenactment, it wasn’t quite feasible for the kids to sit through it all since it was entirely stage production format. But, we had the chance to start off the morning with a few enjoyable presentations.

After a couple of speeches telling of how the war impacted the immediate area, there was the dedication of five new Civil War historical markers that will be put in place in the coming months. 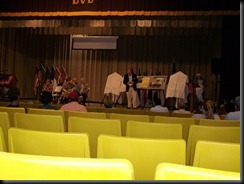 Next came our favorite part – at least mine and Doug’s. Most of the Civil War history related to DeValls Bluff is actually not Confederate history. It is Union. In honor of Easter, a local pastor donned the persona of a true, historical figure from 1861, a Union chaplain who traveled down from where he was stationed in northeast Arkansas that year to lead an Easter service for the men stationed in DeValls Bluff. He dressed the part and preached the actual sermon preached by that chaplain Easter 1861. We also sang the hymns that were sung that day. It was a really neat service. 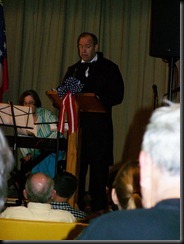 As break was called, we headed outside. A man had driven all the way down from Wisconsin to attend this event and teach anyone interested how to play cricket! Doug decided to give it a try. 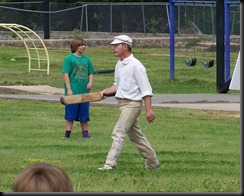 Here he is getting ready for his turn to bat. No one on the field, other than the teacher, knew anything about the game. I think that’s what made it fun! It was neat to watch the concept begin to “click” in the minds of the players. 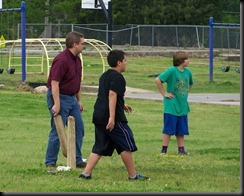 And, of course, we can’t forget the face painting! That’s always fun! 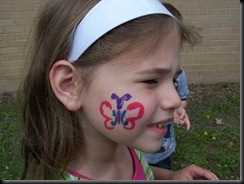 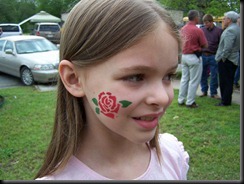 Herding Grasshoppers said…
Oh that IS interesting. I would've assumed it would all be confederate.
May 12, 2011 at 10:31 AM

The Hibbard Family said…
The second one we did (which will post Tuesday, I think), was also predominantly Yankee. I think Arkansas was just one of those strange places in the Civil War with split loyalties and a lot of Union occupation. I know in my own family history there were brothers who were split, one on each side.
May 12, 2011 at 10:34 AM