Skip to main content
Labels
Posted by The Hibbard Family May 20, 2011

For those of you who have never met Bunny, allow

me to introduce you…this is Bunny, the fourth member of our family. He joined us Easter of 2002 when he hopped into Olivia’s first Easter basket. She didn’t take to him immediately, but by year’s end she and Bunny were inseparable and have been almost ever since.

Meanwhile, Olivia was born to a father who has long loved to have a little fun with favored stuffies. He comes by it honestly – his own father shares the same love and, in fact, taught him the art of such forms of entertainment. So, Olivia has learned over the years to protect Bunny and to search for him wisely when he does turn up missing. Also, many wrestling matches have occurred over possession rights.

As more children have been added to the family, more stuffies have joined in the fun. Angela tends to vary her preferred stuffies. A small black cat. Napoleon the Penguin. A large stuffed cow named Cowabella. But, the most tempting stuffy for 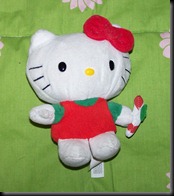 her father is none other than Hello Kitty. Where Angela came up with her obsession with Hello Kitty, we do not know. But, she definitely has one. She primarily owns Hello Kitty accessories, but she does have two small stuffies.

Having laid that background, allow me to share my absolute favorite story from our weekend.

We were getting packed up and ready to leave the house Friday morning when Olivia came in and asked where Bunny was. Now, for the record, Daddy does not mess with stuffies when we are trying to get packed to go somewhere. There is too much risk of an essential stuffy being left behind. So, he insisted that he had not touched Bunny. I hadn’t seen him all morning, and Steven knew nothing about his whereabouts either. (Steven does take after his father and frequently initiates the Bunny game these days.) Angela was in the shower, so Doug went to call to her through the door and ask if she knew anything about Bunny’s whereabouts.

“He was all alone on Sissy’s bed, so I took him and put him under Steven’s bed.” Her answer was matter-of-fact and innocent. And we just died laughing! Without telling Olivia where Angie had hid Bunny (he couldn’t give away such a good hiding place!), Doug went to retrieve the missing rabbit and returned him to Olivia. We went merrily on our way and thought nothing more of it…until Saturday morning.

We were enjoying a leisurely morning in our hotel room in Springdale, and I had just finished my shower. Olivia informed me that she was cooking breakfast. Doug was just grinning. Olivia pulled a pot from the oven, opened the lid, and out peeked Hello Kitty. Appropriate retaliation, I must say. Angie snatched her up, but that was not the end of it.

A little while later, Olivia then put Hello Kitty in the fridge to marinate in preparation from lunch. Once Hello Kitty was appropriately marinated, she pulled out a pan and placed the cat in the pan, returning her to the oven.

Meanwhile, Olivia went off to do something, and while she was gone, Steven and Angie conspired together to replace Hello Kitty with Bunny. They then sat back to wait for Olivia to discover the switch. Olivia came into our room to tell us that she was preparing lunch  and that she had just turned it down so it wouldn’t cook too fast. Doug and I were about to fall out laughing, knowing about the little switcharoo, but Olivia thought we were laughing because Hello Kitty was back in the oven!

Finally, as we were getting ready to head down to get some real breakfast, “lunch” was actually checked on, and it was discovered that the switch had been made. Olivia was dumbfounded and Steven and Angela were rolling on the floor laughing (as were we).

Yes, the children are being raised well. Who knows who the next victim will be or what method of trickery will be employed?! Never a dull moment, that’s for sure!

Herding Grasshoppers said…
They'll always remember the fun you all had!