Skip to main content
Labels
Posted by The Hibbard Family May 17, 2011

As promised, here is part two of our two day weekend in Little Rock after the Friday night concert with Mom and Tim.

Every year the Historic Arkansas Museum hosts what is called the Territorial Fair. This is our first year to attend, and it was well worth the time! And, like with other events across the state, this year’s fair focus was 1861, the early days of the Civil War.

Many areas of the museum that aren’t normally opened were open for the fair. So, we got to see things we’d never seen before! And to top it all off, there were quite a few people in costume walking us through it all.

We started by heading across the street to one of those rarely opened sections of the museum. 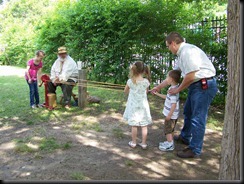 The kids took turns handling each of the three tasks involved in the rope making. Here Olivia is holding the end steady using a hook around which the strands of twine are looped. Steven is holding a device that, once the strands are sufficiently twisted individually, will guide them all to intertwine to make a single rope. When his turn comes he’ll slowly walk forward, pushing the device from where Olivia is standing… 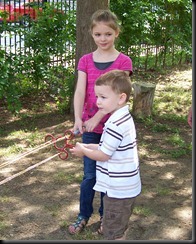 …to where Angela is cranking. She’s turning the handle to make the ropes twist. 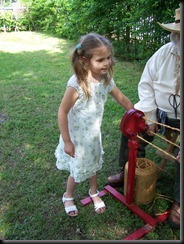 When all was said and done, each had made their own rope! 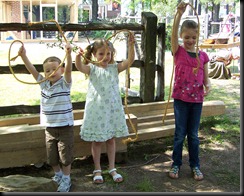 Next we went into a small cabin where a woman was cutting strawberries and cooking a few other things in the fireplace behind her. She told us that she was preparing the strawberries for making fruit leather. It’s essentially a fruit roll-up with nothing but pure fruit – and maybe a little sweetener if absolutely necessary. Yes, we’re going to try it. Yes, I’m excited!! One of our next stops was a cabin with a couple of rooms extending off of an open breezeway. We visited the parlor, where Steven immediately found a horse just his size! With his rope in hand, he looked quite the cowboy! 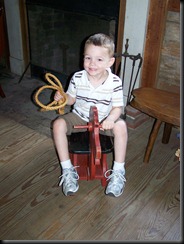 I was immediately drawn to the table of homeschool supplies – a slate and chalk (I wish there had been a slate pencil), a board that held pages with some words for beginning readers, and a few other odds and ends. Steven had fun reading the words on the board. 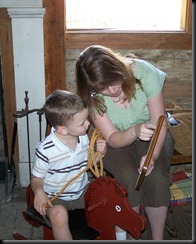 Meanwhile, the girls got to help card some wool. 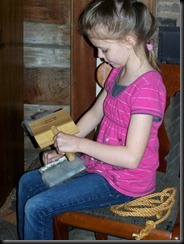 Outside on the front porch (the breezeway is evident to the left there), the girls helped stuff a pillow and mattress with hay and cornhusks. 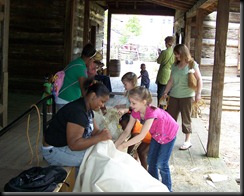 Steven wasn’t interested in that activity, so he waited patiently at the end of the porch. 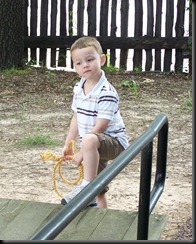 Back outside, we looked at the garden (this is what we need to do next year!) and the house behind it in the frame stage of construction. Inside, a blacksmith was busy making a knife. 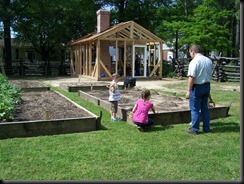 We finally walked back across the street to the more familiar outdoor section of the museum, but even there we got to see a few things we hadn’t seen before.

The printing house is a brand new display, built with the original construction supplies – handmade nails and all! I didn’t get any pictures of the downstairs rooms, but this is the printing press upstairs (and Steven in the fireplace!). 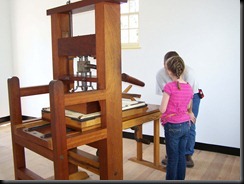 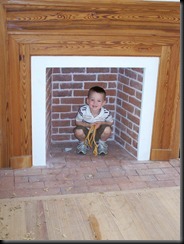 We saw some kids being taught to drill. 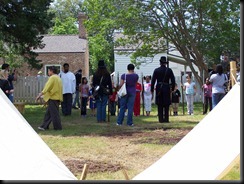 The actual size of the tents shared by two enlisted soldiers. 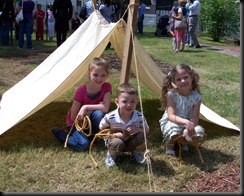 And the first breed of chickens to be introduced to the state of Arkansas. She was soft! 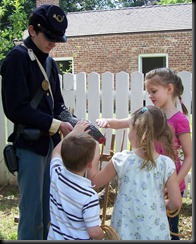 Our last outdoor stop was watching a man hand carving wooden yokes for carrying things like water buckets. This one was designed for children! 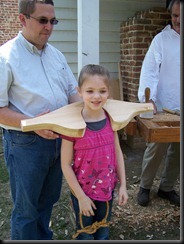 Oh, and I don’t have a picture of it, but we also visited the lawyer’s tent where Doug and I were issued a brand new marriage license! Yes, our new anniversary is now May 7, 1861!

As we were entering, first thing in the morning, there were two men playing their fiddles welcoming guests. On our way out, this lady was playing the hammered dulcimer.  Fascinating. 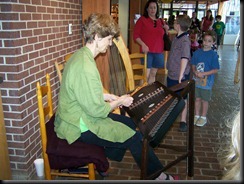 There were other things to see, but we were tired and hungry and so very full of all of the fun things we’d already seen! So, we called it a day. But, an awesome day it was, that’s for sure!

Herding Grasshoppers said…
Looks like a ton of fun!

And happy 150th Anniversary, by the way ;D