Skip to main content
Labels
Posted by The Hibbard Family May 05, 2011

Going Back a BIt

I was looking at pictures just now…so much fun stuff to share from April!  Actually, I just realized I missed something from March that I can’t believe I didn’t blog about! It might be old news now, but some day this blog will hopefully be our record to add a little more to the memories than what pictures alone can tell. So…back to March we go. (Then we’ll get to Easter activities at church, then to our field trip from two weeks ago, then Easter Sunday pictures, then the things we’re doing this coming weekend…yes, plenty of blog fodder. I just need to sit down and do something with it!!)

The March occasion was a brief visit from Doug’s parents. They spent some time with Doug’s sister Stephannie and her daughter Morgan that particular Saturday, and then arrived in Almyra on Sunday morning to meet us for church. But what the kids and I didn’t know was that cousin Morgan was coming with them! The girls were ecstatic when Morgan walked in right as they were headed to Sunday school!

We had an enjoyable church service and then headed home for a nice afternoon visit. 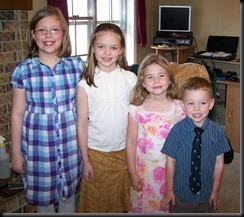 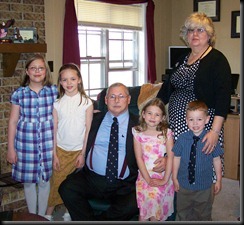 Steven’s favorite part of the day, though, was the ties. I don’t know if you can tell from the picture, but the ties are all matching, and they have mosquitoes on them! Yes, mosquitoes! (I really think they’re the official “bird” of Almyra, by the way.) We were given three adult ties, and I managed to reduce one in size so Steven could wear it.  We had three generations in matching mosquito ties. Steven was excited about it for days! 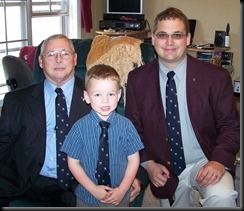 Herding Grasshoppers said…
Those are great photos, Ann! And I LOVE the matching ties!

You sure can see the family resemblance, can't you?

The Hibbard Family said…
Julie, you should see the baby pictures. Those three Hibbard men cannot deny one another. :-)
May 6, 2011 at 6:32 AM