Skip to main content
Labels
Posted by The Hibbard Family May 01, 2011

What We’ve Been Up To

It’s been one of those weeks. One of those really long, somewhat restless weeks. We felt the relief of getting through the storms, but that relief was definitely sobered by the reports coming in of the devastation those same storms caused across the rest of the south. Then that was mixed with extreme thankfulness as we heard from one friend after another, finding that not only were they all safe, but they also all escaped damage to their homes. Far too many people cannot say the same thing. We’ve been very, very thankful this week.

As for around here, the main damage dealt with has been from the heavy rains. Rice field levees were hit hard, and corn was flooded and laid flat. So, this week the farmers have been out trying to figure out what repairs need to be done and what levees will have to be repulled and reseeded. Unlike some of the farms closer to the MS River, though, the flooding has not been extensive. For that, we are thankful. And, unlike those a little south of us, we didn’t get the tennis ball sized hail, so there was no damage from that. Yes, we are very thankful around here.

Obviously, I haven’t taken the time to blog much this week, but I still have Easter pictures and such coming! Hopefully this week…

In the meantime, yesterday we got to do something we haven’t gotten to do in a long time. YARD WORK! Believe it or not, it actually was exciting to get that done! Because of the timing of each bout of rain,

about the time the ground dries out enough to work in the yard, another round of rain comes through. But, we had sunshine Wed, Thurs, and Fri – enough to rid ourselves of the 2-3 inches of standing water in the yard. By Saturday the clouds had rolled back in, but the rain hadn’t yet returned. So, while Doug cleaned out the gutters, the kids and I gathered the sticks and branches that cluttered the yard and evaluated the garden. There are signs of life in the garden, but the only thing we’re sure of is the corn. It had grown enough before the flooding that it is still in its nice rows. As for the rest of it – well, it appears that things are growing, but not where they were planted. We are suspicious that the seeds got washed here and there before they took root, so we have no idea what is where. In our inexperience, we also aren’t completely sure what’s weeds and what’s veggies. But, we also still can’t get too far into it to do much weeding anyway because it’s still so mucky. But there’s life! That’s what’s exciting!!

While Doug did the dirty work in the gutters, I got the easy job of 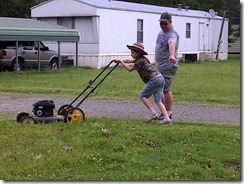 hopping on the riding lawn mower (I love that thing!). Then, when he was done on the roof, he pulled out the push mower to do the ditches and edges. Olivia wanted to give it a go, so he showed her how to push it. She did pretty well – at least until Doug sent her scurrying away when he saw a snake in one of the ditches.

Sure enough, the rain came back in the night last night, but the yard and gutters are DONE! Ahhhh…it feels nice.

Oh, and just because it was funny, I have to throw in this picture. Remember Punky Brewster from the 80’s? There are days – many of them, in fact – when I just have to call Angela Punky. She, of course, has no idea why…but you can judge for yourself. (Later in the day a dress-up policeman hat and a pair of Steven’s cowboy boots were adding to the mix.)

Herding Grasshoppers said…
So glad you guys are all right! And what a lot of good things you got done around the house and yard!

Hope your garden makes it... it's so hard to tell weeds from veggies when they're tiny.