Skip to main content
Posted by The Hibbard Family July 12, 2008

I kind of miss having normal days because the abnormality distracts from the sweet things the kids do on a day to day basis. But, they have been so good in the move. I'm so very proud of them.

Olivia has been a good helper. Many times I haven't known what to tell her to do, but she's wanted to do whatever she could to be helpful. She's entertained Steven, packed and unpacked boxes, helped clean, and on and on. There have been times when I could tell she was a bit melancholy. She always said it was because she had a headache or was tired, but I'm sure some of it was emotions that she couldn't quite understand.

(The first pictures are of our first night in Monticello - on the hotel room floor.) 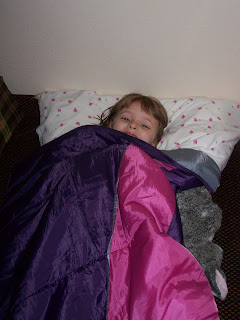 Angie has really surprised me in all of this. She has been so grown up and understanding. I am so amazed and thankful for the way she has matured in the way she handles change. She has had some emotional moments, as we all have, but she has faced the move with enthusiasm and excitement. She did have a moment at church Wed night when she really didn't want to go with her new teacher, but as soon as there was the promise of playing on the playground after their lesson, she decided it wasn't such a bad thing after all! 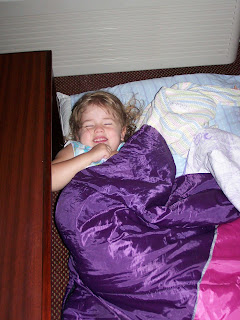 Steven has shown an understanding that I never would have expected from a not-quite two-year-old. He's been upset a lot, but he has readily accepted "Pooka's new house!" (Pooka is his nickname, for those of you who don't know!) He did do something last weekend that really floored us. He had been watching as the trio from church helped Doug load some of our things onto the church trailer last Saturday. Later in the day, he started dragging one of his favorite big toys to the door saying, "I want this going!" How his little mind could wrap itself around the idea that the stuff "going" was going to be with us, I don't know! But, he knew it somehow. He has needed Mommy and Daddy a lot, but he's really taken to our new environment. 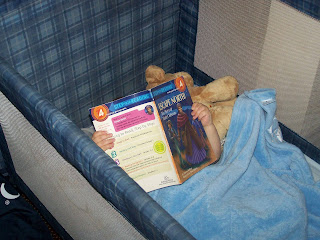 And, he's growing up! After prayer, consideration, and a phone call to Charlene who moved when their son was about the same age, we decided to set up the toddler bed instead of the crib. On Wednesday afternoon he slept in it for the first time for naptime, and I had to tell him multiple times to get back in bed. He was so excited about his toys! Of course, we had just finished setting up his room that morning, so it was all very fresh and irresistible. But, he finally went to sleep, and has slept perfectly in it since then, both for naps and at night. Such a big boy! 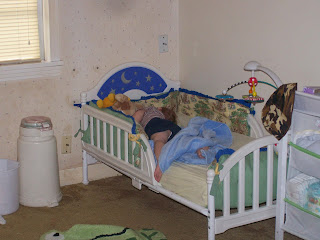 Steven insisted on riding his airplane in the school room closet! Silly boy! 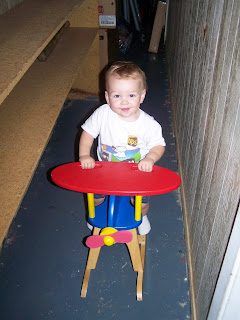 The more we unpack, the more we see how huge this house really is - much bigger than the one we left. Sometime in the next few days I plan to do a video tour of the house. Stay tuned!