Skip to main content
Posted by The Hibbard Family July 25, 2008

We had family night last night, and it went well. I forgot the camera, so Doug got a few things with his cell phone. The quality isn't great, but we thought we'd post them anyway.
Here is Steven watching his sisters sing... 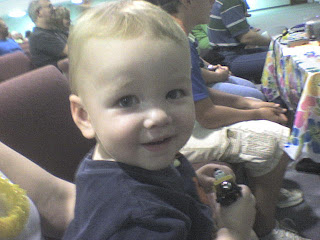 Angie's song...the cutest part was when they were done. As everyone was clapping, Angie grasped the sides of her dress and gave a little curtsy!

Olivia's song...for someone with the coordination of her mother (or lack thereof, as the case is with both of us!) she did a great job on the motions, especially on the second song (first song shown here).